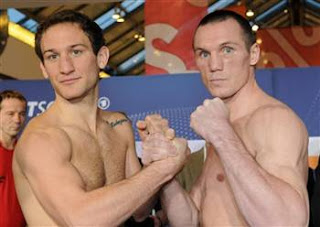 In a relatively tentative bout, Sebastian Sylvester (33-3, 16 KO) successfully defended his IBF middleweight trinket for the first time with a tenth round technical knockout victory over late-replacement Billy Lyell (21-8, 4 KO) in a snowy place in Germany.

Sylvester decided to feel out the opening rounds, being out-worked by his American challenger. The difference is class was evident in the fifth, as Sylvester began to land heavily and frequently on Lyell’s face.
The German middleweight landed repeated straight right hands as Lyell struggled to stay up with the quicker pace of the fight in the middle rounds. His trainer, Jack Loew, had seen enough, and stopped the fight in the tenth round.
In my opinion, it was the perfect time to stop the fight. Lyell is a light hitting fighter that didn’t need to get taken out of there by a punch or sequence of punches. It would only derail him further on in his journeyman career. Some see it as premature, as he was still punching back and not particularly hurt, but his face did look busted up.
On the undercard, Robert Helenius (11-0, 7 KOs) was impressive in his breakdown of Lamon Brewster (35-6, 30 KO) by stopping the faded former titlist in the eighth round, after he was floored in the second following a body shot. It was actually entertaining, yes that’s right, heavyweight entertainment.
Kubrat Pulev (5-0, 3 KO) scored his most impressive victory to date with a stunning fourth round knockout victory over Matt Skelton (22-5, 19 KO). The Bulgarian looks like one for the future, but could well be another eastern European bum. Karo Murat (21-0, 13 KO) stayed busy with a second round knockout of Sean Corbin (13-2, 9 KO) in a light heavyweight contest.
Brian Magee (33-3-1, 23 KO) shocked local favourite Mads Larsen (51-3, 38 KO) to capture the Dane’s European super middleweight title by flooring the hometown hero four times in the fight.
Magee, who was stopped in a thrilling war by Carl Froch earlier on in his career, scored his career best win over the heavily-backed Larsen with a superb seventh round stoppage win.
To call it an upset is an understatement, as Magee really isn’t known for his power punching. Larsen is or used to be a decent technician, second-tier fighter that might be well past his prime by now. But Magee is no spring chicken at 34, is he!?
I’ve only seen glimpses of the fight here and there as the stream I found was poor and Danish. Magee fought a dirty fight, repeatedly low blowing Larsen in the third.
Magee floored Larsen in the fifth with a body shot and followed up with intense pressure that Larsen couldn’t handle. The Dane crumbled in the sixth, kissing the canvas twice and once more in the seventh as the referee waved away the contest.
Hats off to Brian Magee, I really didn’t expect him to bring back the belt from Denmark, take a bow son.