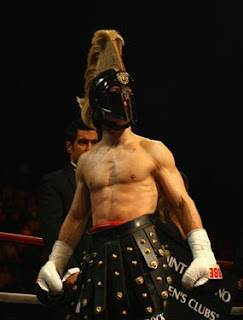 With Amir Khan “deep in negotiations” with Juan Manuel Marquez, Katsidis-Guerrero could be for the full WBO title. In the co-feature, Marcos Maidana (27-1, 26 KO) and Victor Manuel Cayo (24-0, 16 KO) will also be filling the vacancy of the WBA light welterweight title left by Khan.

I would prefer to watch Khan-Maidana and Katsidis-Marquez than Khan-Marquez, with the winners of both facing off in an elimination process (dream on). I see Khan picking off Marquez round after round, jabbing and moving with Marquez too slow to counter. Khan-Maidana would at least give us a pop to see how much Khan has developed under Freddie Roach, but if they vacate, my respect for Khan as a champion is out of the window because I see Khan beating Maidana nine times out of ten.
Marquez and Katsidis is a mismatch, but if Marquez is on the slide and suffering mentally since the battering to Floyd Mayweather, Katsidis will at least make it interesting. Katsidis-Gurrero doesn’t do anything for me. I think Katsidis power is overrated at world level and who knows how Gurrero will take an extra five pounds. Maidana-Cayo is a thrilling match-up.

There have been rumors circulating that WBO titlist Timothy Bradley’s promoter Gary Shaw has attempted to match his fighter up with Maidana, but nothing has come of it at late.

Any fight with Maidana is good, but a Khan-Maidana fight is the one that fans want. Another group of good fights though added to a packed autumn schedule.