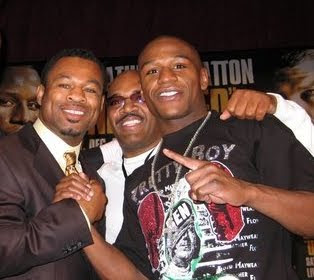 I dare you to hate on this one. Go ahead…I dare you.

While Manny Pacquiao is fighting Joshua Clottey, the guy who lost to the guy that he just blew away, Mayweather will be fighting the consensus number one welterweight in the world and a first ballot hall of famer.

Mayweather’s opponent is the same one who practically begged Pacquiao for a fight to no avail. Pacquiao’s trainer, Freddie Roach, even said, “Shane came to the gym twice to ask me to let him fight Manny…I told him ‘no’ both times, and both times for the same two reasons: First, there isn’t enough money there, and second, you’re too good a fighter.”

Best of all, this fight was signed with no drama about fear of needles, superstitions and blood-letting; No weight stipulations and penalties and no petty lawsuits.

Mosley showed the world what a fighter who wants to fight actually looks like by quickly agreeing to Olympic style blood testing. So, unlike Manny’s bout in weak-commissioned Texas, Mayweather-Mosley will be a guaranteed encounter between two 100% clean fighters competing solely with their God-given abilities. This is a guarantee that Pacquiao chose to deny the fans.

The signing of the Mosley bout is a dose of good karma sent to Mayweather after having to withstand the injustice of being branded a “chicken” for a fight that Pacquiao backed out of and intentionally squashed.

All the name calling and unfair aspersions on his character, the mocking cartoons and videos popping up on the internet and on less reputable boxing sites (**cough, The Examiner, cough**) are all discredited because, in the end, it was Mayweather who took the higher ground and it’s Mayweather who’s fighting someone, on even terms, with a solid chance of beating him.

Floyd Mayweather-Shane Mosley is  a done deal for May 1st and we’ll now see how the dedicated Mayweather haters conduct themselves. After all, this is what they’ve claimed to want from Mayweather for the longest time.

I can almost hear them begin to clear their throats, crack their knuckles and dream up ways to rain on the parade, though.

Mosley, who was the unquestionable top welterweight after beating Antonio Margarito to a pulp, will suddenly age to the point of being a decrepit old man. And the same Mosley who was willing to dry out to 142 for a fight with Manny, will become a tailor-made walk in the park for Mayweather who is always “ducking the very best.”

But enough about the haters…If they’re missing out on one of the true greats of this generation and willing to downplay a true Hall of Famer like Mosley in the process, then so be it; If they’re willing to do this based solely on false propaganda, misinformation and a faulty time line, then it’s on them. Let them stew in their own hate while the rest of us enjoy a truly classic encounter.

Let’s get back to the business of boxing where fighters actually choose to fight one another inside the ring and not in court.