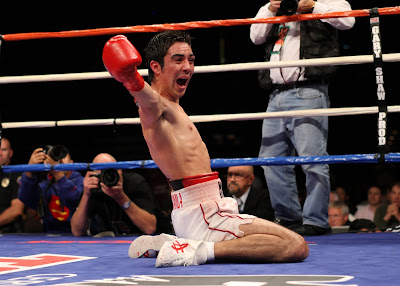 All the hype has been around Edwin Valero’s (26-0, 26 KO) hotly awaited US television debut; but quietly in the background, Antonio DeMarco (23-1-1, 17 KO) set-up camp and stayed away from the interested media. Occasionally, “Tony” did release trash talking statements aimed at his Venezuelan opponent, but the attention was still firmly focused on Valero.

No wonder, as the WBC titleholder is an electric lightweight and the biggest puncher pound-4-pound in the sport today. His wild and unique style makes him more than a pleasure for fight fans, but also more exposed by any top opponent. However, the jury is still out on DeMarco to see if he qualifies as a ‘top opponent’.

DeMarco hopes to be a thorn in Valero’s side. As a Mexican, a win would hand him unheralded popularity, a chance to be the next Mexican icon. In my view, the 24-year-old just about graduates from prospect to contender, and in his last fights when it was clear that the WBC bandwagon had jumped on him and kept him under their spell, the idea of him beating Valero in his mandatory shot was a foolish prediction. But over the course of his last handful of fights, DeMarco has matured from an all-out slugger to a smart boxer-puncher, a style that could be kryptonite for Valero’s if some slickness was added.

The confident, slightly arrogant two-weight titlist looked to have evened his flaws when he hooked up with experienced trainer Ken Adams. And it showed in his second-round knockout demolition of Antonio Pitalua as he established a revitalized and potent jab to set up his wide-angled hooks.

It seemed like a pathway to a full license for the first boxing Youtube sensation, which has been denied a license in every state except Texas since a motorcycle accident caused a brain injury. With Nevada’s recent tweak on the law about MRI scanning, another door may have opened for ‘El Inca’, but that remains ajar for now.

DeMarco undoubtedly has some level of pop in his punches, but for the sweet science fans, mostly Mexican, who predict he’ll stop Valero based on his only career knockdown, in the third round to then-WBA titlist Vicente Mosquera, they’d be turning down the wrong alley. My call is that it’s a balance problem. It’s no secret that Valero’s aggressive style leaves him off-balance and open for counters, very similar to Cuban sensation Yuriorkis Gamboa. I’m not ruling out that DeMarco might make me eat my hat, but basing it on archived fights at a different weight class that he has a non-existent punch resistance would be out of line, as Valero proved by rallying back to stop him in the ninth. 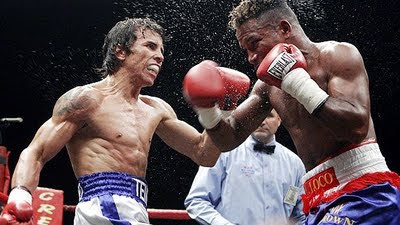 since he switched trainers temporarily with Adams, who fine-tuned the Venezuelan to learn the simpler aspects of life in the boxing ring, such as gauging distance, using his awkwardness to his advantage and basics such as keeping your chin low. In the three months Adams trained him before Valero stupidly got rid of him; Valero had gone from a highly-flawed but dangerous opponent to a patient, impossible to read and twice as dangerous puncher just because his timing was upgraded.

Boxing is simple when you don’t get complicated. Yes, the oxymoron is always a pain, but it’s these things that ego-inflated fighters tend to forget. That’s why I give DeMarco a glimmer of hope against the heavily backed monster.

On Saturday, Valero will be without a qualified and known trainer in his corner. He will have a mitt-man filling in as the role of head trainer and tactician, Mario Morales.

Maybe he’s the new Naazim Richardson, or maybe just another Joe Santiago, but it will be interesting to see if they have a plan B if plan A backfires. DeMarco is taller than Valero by three or so inches, what do they do if DeMarco fires his long arms and keeps Valero at bay. Do they tone down on the aggressiveness? Revert to boxing? Or does Valero make every executive decision in every camp he’s included in?

All questions that hopefully for Valero’s sake (and my prediction league ranking) won’t even be posted on February 6. I also question that the title challenge has come one step too early for DeMarco, similar to Lamont Peterson last year, he’ll fall short because of reckless matchmaking.

The WBC have cared for baby Tony, Showtime have nurtured him into the moody teenager, but will the opportunity at Valero turn him into the disciplined and mature man that people now expect to see from someone who has not showed an ounce of rejecting a brawl against a slugger since the young Mexican has been showed on TV?

Against Almazbek Raiymkulov, a proven puncher against lower level opposition, DeMarco did stay away from swapping punches, but he was still a face-first bloodthirsty punching machine that has seen him wipe out seventeen opponents. The problem of being face-first against Valero is that your face will be first to kiss the canvas.

Why bring up the WBC? This is the problem with all fighters that are under the wing of a major organization, they tend to be chucked under a bus if their current titlist is as appealing. This seems to be an all too familiar case, which works both ways, as the WBC have happily backed Sergio Martinez’s move up to 160 pounds to open up the vacancy for the son of a legend, Julio Cesar Chavez Jr.

Politics, politics, politics. Boring. But that’s the core to all of boxing’s problems. The WBC are quite happy to give DeMarco a shot because of his Mexican roots, which is just plain stupidity.

Without realising how ill-prepared and short of experience against someone who actually fights back, the WBC might have just blew out DeMarco’s hopes of being a future world champion as there’s a distinct possibility that Valero will hand him such a heavy beating that DeMarco will never recover from it, mentally or physically.

This fight comes down to who’s flaws gets exposed first. The superior boxing skills lie with DeMarco. You would predict that the style match-up benefits Valero. All in all, it makes for a very intriguing fight.