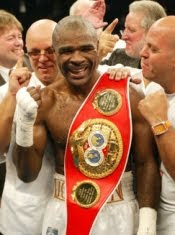 For the chance to face unbeaten IBF titlist Tavoris Cloud later on in the year, Mack started the better of the two by landing the cleaner and more precise power punches on the outside in the opening round.

The second went the same as the first, with both fighters opening up but Mack getting the better of the action. Both fighters landed solid right hands and traded hooks as Johnson pressured the fragile Mack.

After a one-sided third round in favour of the ‘Road Warrior’, both fighters traded in every corner of the ring as Johnson cut off the escape routes to punish the eleven-year younger Mack with heavy jabs and body shots.

It was obvious in the fifth that Mack was beginning to fall apart mentally as Johnson continued to plod forward not giving Mack a chance to settle down.

The ending came in the sixth, as a solid right-hand over the top floored Mack who was cornered at the time. Mack received his first standing-eight count, before he was on the canvas for the second time as another right hand caught him off balance. Mack continued but not for long as another straight shot caught him off-guard for him to touch down for the third time in the round.

It was a decent scrap while it lasted, but it was pretty obvious that Johnson was out of Mack’s league from the fourth round onwards. The style didn’t match-up for Mack and he was drawn into the wrong fight. Johnson will now move on to face Cloud in what should be, another exciting fight.