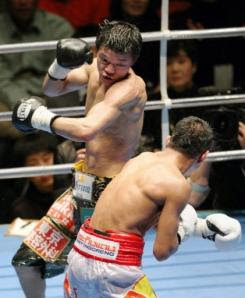 Now the WBA titleholder, his brother Koki holds the WBC belt and is regarded as the division’s number one. Koki defeated Daisuke Naito, who took the “0” away from Daiki’s record, with a competitive unanimous decision victory in November.

The fight itself wasn’t half as good as the first. It was a messy affair with Kaovichit penalized twice for excessive clinching in the sixth and eighth. Kaovichit controlled the early stages but started to fight Daiki’s fight, and the Thai fighter couldn’t handle the pace of the bout from the fifth round onwards.

The latter stages was all over the place as Daiki kept on complaining, Kaovichit kept on clinching and I kept on falling asleep at my computer screen. The judges scored the contest 116-110, 116-110 and 114-112. BTBC scored the fight 114-112 also to Daiki Kameda. Don’t be shocked if there’s a third fight.

There’s also a third Kameda brother, Tomoki (12-0, 10 KO), who’s the remaining Kameda without a trinket. At just 18, he supposedly has the most exciting style of the three, which is a remarkable feat in itself, so expect to see Tomoki on the world scene later on this year.