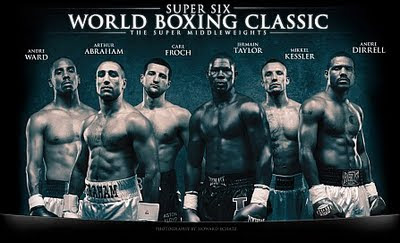 When the Super 6 Boxing Classic tournament was launched, it received the same amount of good karma as Manny Pacquiao gets for feeding the homeless in General Santos City. Boxing forums were buzzing, fans ecstatic; HBO fuming.

Angry people at the top of the HBO tower attempted to devise different strategies to work around the tournament, even build something of the same stature. But they couldn’t. Showtime had outthought HBO. 1-0 Showtime.

Angered by Showtime’s unique approach to the sport that had befuddled everyone at the network, there was only one answer from HBO, screw it up.

Showitme carelessly let a jewel in Lucian Bute slip out of their grasp, and HBO duly took advantage. The ‘Super Seventh’ as he’s known to many, Bute is probably the best fighter at 168 pounds. Why isn’t he in the tournament is beyond me.

Surely, letting Bute go will hardly ruin the tournament. Wrong. Bute goes on to score a stunning knockout win over Librado Andrade to climb to the top of the super middleweight ratings, live on HBO.

So HBO are squaring up with its own take on the super middleweights.

Recent rumours suggest that Showtime are shifting the dates of their Super 6 doubleheader involving Andre Ward’s first defence against Allan Green and Carl Froch ‘s title fight versus Mikkel Kessler, back a week to April 24.

While the exact reason has not been confirmed, it seems pretty clear that HBO’s muscle flexing counter-programme has caused the shift. HBO will be airing a split-site doubleheader, opening with Lucian Bute defending his IBF championship against Edison Miranda in Canada, finishing in Atlantic City with Kelly Pavlik defending his middleweight championship against Sergio Martinez.

I think you’ve cracked it by 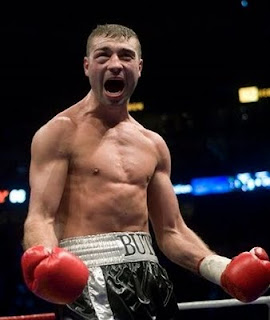 The winner of Bute-Pavlik will be the real deal at 168, while the tournament contestants are battling for pride and position, not for #1 spot. Cue fist pumping from Ross Greenburg.

HBO have built their battle for #1 spot the HBO way. They will build Bute-Pavlik into a major attraction and put the fight on at the same time as it gets tense in the Super 6. After the tournament has ended, HBO will bully Showtime in negotiations to win the right to broadcast the biggest fight of them all; Bute-Pavlik winner vs. Super 6 winner.

Is it only me that will find the run-up adverts about the major fight cringe-worthy? Imagine Max Kellerman rambling on about the Super 6 Tournament winner with a hint of jealousy in his voice.

I’m all for cutthroat competition between networks as fans benefit from it, but is this really competition? They’re not trying to better Showtime, they’re trying to demolish something that could’ve changed the shape of the sport. Because it’s Showtime’s product, it must be destroyed. I think fans should have a problem with that.

If HBO competed with Showtime by putting on rival cards that were matching up with theirs, I think I would be fine with that. That’s not the case here. This is a sabotage operation to spew out any chance of Showtime success.

If they do eventually match-up the winner of Bute-Pavlik and the Super 6, what right do HBO have to broadcast the fight that’s been hyped up by another network? It seems to me that HBO’s goal here isn’t to stay ahead of the game, but to eliminate the competition. HBO’s response is not to improve it’s own product, but destroy their rivals’.

Since 2007, Showtime have consistently put on better fights than HBO with a much smaller budget. This proves that HBO’s marketing strategy isn’t working, hasn’t been working, and doesn’t look like it will suddenly work.

Showtime is never going to back down. If you think this will jeopardize the chances of Showtime investing heavily in the sport, I would disagree. I think incidents like this will teach Showitme an important lesson, and ultimately, spur them on in their fierce battle with HBO. Remember, HBO can’t host everything.

These broadcasters are behaving like sanctioning bodies, playing games with super champion statuses and interim farces. Again, the boxing world is reminded why the world tuned out of the sport many years ago.