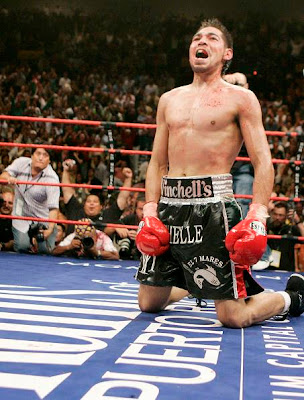 If you look around cyberspace these days, there has been a subtle shift in the public wind as it pertains to Antonio Margarito and his indefinite suspension from boxing. Margarito’s attempted use of illegal hand wraps for his January, 2009 contest with Shane Mosley seems a distant memory to some and, shockingly, a flat-out falsehood to more than a few.

A year ago, there was outrage and indignation in the public discourse. Now, articles are popping up in support of the return of Margarito’s license and all sorts of conspiracy theories are springing up that would have one re-think their stance on “The Tijuana Tornado.”

But, before we forgive and forget, let’s take a look at the night Antonio Margarito wanted on January 24th, 2009.

If Margarito had his way, he would’ve been leaping for joy over a fallen Hall of Famer in Shane Mosley and his post-fight interview would’ve consisted of smug grins as he gave special thanks to God and all Mexicans everywhere. It was his intention to climb the ranks to mega-star status by battering Mosley to an ugly, bloody pulp, as he did against Miguel Cotto about six months earlier. And he would’ve done it with the full knowledge that he was sporting doctored, illegal hand wraps.

And please spare me the fantasy that Margarito had no idea that his trainer, Javier Capetillo, was loading him up with a “plaster-like” substance.

To think that a fighter would have no idea that two wet, cement knuckle pads were inserted into his hand wraps is silly. To buy into the fairytale of some sort of conspiracy against Margarito is patently ridiculous.

What would the California State Athletic Commission stand to gain from banning a popular Mexican fighter from their state? Why would a commission, with no vested interest, choose to outlaw the guy who just sold out the Staples Center? The fact of the matter is that the wraps confiscated on January 24th were personally reviewed by the commission members and even checked by an independent laboratory.

Even Capetillo, himself, when faced with the evidence, basically confessed and offered himself as a sacrifice. Yeah, I’ll say it again for those who have come to doubt the evidence: Capetillo confessed to inserting illegal knuckle pads into his fighter’s wraps, thus completely shooting down the recent claims regarding some sort of controversy as to whether the gauze was ever truly as illegal as initially reported.

Now, a little over a year later, Margarito happily prepares himself for a May 8th return in Mexico while talking about the eight figure November date with Manny Pacquiao promised to him by Top Rank’s Bob Arum.

Other than an extended vacation from the sport and some early negative press, nothing really happened to him as a result of his infraction. He thumbed his nose at the authorities and at boxing itself and is almost guaranteed to fight again in The United States before the end of the year.

But before our sympathies and/or indifference get the best of us, remember this: Margarito was fine with putting the life of another fighter at stake…as long as it propelled him to where he wanted to go. That’s the Antonio Margarito we need to remember…