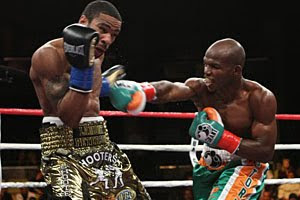 Dominated by Ricky Hatton, the light welterweight division has been a snoozer for the past few years, especially in comparison to its talent-rich neighbours north and south. But all of a sudden, the junior welterweight class is booming with exciting up-and-coming fighters such as Timothy Bradley, Amir Khan and Devon Alexander. They’ve all won an alphabet title in the past twelve months, and all could have a decent claim for the top spot in the division by the end of 2010, which is currently held by Bradley.

Add Marcos Rene Maidana and Juan Urango to the mix, two all action power punching fighters that put everything on the line with their one-track minds. Update the wildcards; Nate Campbell, Joel Casamayor and Andriy Kotelnik, all crafty fighters that can easily be underestimated. Flashy fighters such as Paulie Malignaggi, Zab Judah and The BTBC’s 140 pound House Fighter, Lamont Peterson can cause a stir at 140 pounds and have a strong case to be ranked at the bottom of the top 10.

It gets deeper. Kaizer Mabuza, who recently upset Kendall Holt is now up to second-tier contender. Victor Ortiz and Kendall Holt can come back from heavy defeats later on this year. Mike Alvarado and Victor Manuel Cayo are unbeaten and look promising, as is the obscure Ionut Dan Ion and Cesar Rene Cuenca. Golden Boy have been hyping up another Argentinean, Lucas Matthysse, another unbeaten fighter that has talent in abundance. Ex-title challenger Herman Ngoudjo is not quite done yet, neither is Gavin Rees. The list goes on. 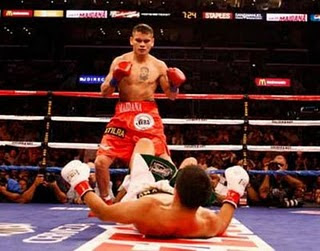 ht be a long way off the likes of Bradley, but match up anybody that I’ve mentioned so far with each other and I won’t be complaining. A blown-up Ricky Hatton might still be the biggest money fight at light welterweight, but the division is catching up fast. There are just so many fascinating fights that could be made at 140 pounds.

The departure of Ricky Hatton will definitely be viewed as a positive thing as it will open the gateway for fighters to solidify their position in a talented division. Bradley has already seized on Hatton’s inactivity, cementing his place at the top of the standings, for now.

There has been talk of Bradley facing nearly everyone. The likes of Edwin Valero, Amir Khan, Joshua Clottey and Juan Manuel Marquez have been called out recently, all to be dismissed by their associates. Promoter Gary Shaw is so confident that his fighter is the best out there, that he’ll match him up with anyone.

And for once, he’s right. Bradley is the best light welterweight, nobody comes close on current form and level of opponents. Talent wise, Alexander and Khan can compete, but they need a couple of years to develop under careful matchmaking that ultimately depletes them in the long run.

He’s still without an opponent for his May date after weeks of searching for anybody that fits the criteria. However, there’s much action outside of Bradley happening at the moment. This Saturday, Devon Alexander will take on Juan Urango to unify half of the division. In May, Amir Khan will make his Stateside debut against Paulie Malignaggi in his first proper defence of the WBA trinket. Edwin Valero will take on Lamont Peterson in what is an intriguing fight on paper. And in a true crossroads fight, Victor Ortiz will face Nate Campbell in a bout that could swing either way, it depends on what mood the fighters are in on the night.

It’s a great time for the division right now, and fighters should take advantage of the good times. They shouldn’t mess around with tune-ups that could turn on its head, the time is now. Could we see more light welterweights break into the fictional pound-4-pound rankings soon? In my opinion, most definitely. If they can sustain the excitement and quality in their fights, more fighters are bound to break the top 10 a lot sooner than expected.