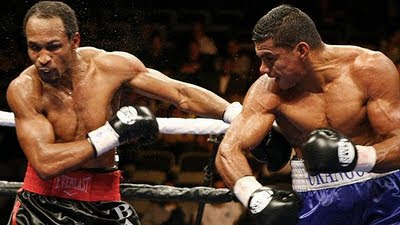 Juan Urango (22-2-1, 17 KO), Montiera, Colombia, is an overwhelming underdog going into his March 6 light welterweight unification clash with Devon Alexander (19-0, 12 KO), St Louis, Missouri, but it’s a position he’s very familiar with. Here’s The Boxing Tribune’s preview of the fight, weighing up the expected tactics from both camps.

Such is the effect of Urango’s insane strength and left-handed awkwardness that even the more gifted fighters are content to outpoint him and impress next time out.

Ricky Hatton was expected to batter the unknown Urango in his return from welterweight following a lackluster performance against Luis Collazo. However, Urango gave him an unexpected gut check as he was made to work for his win by the hard hitting Colombian.

Two years on and Urango found himself in the same situation, on another road trip to a HBO fighter’s back garden. Urango caught Berto early in the opening round with a right hook, which triggered the retreat button in Berto’s mind that resulted in Berto taking him on a merry-chase for the rest of the fight, interrupted ever so often by the quickest clinching ever seen.

For Berto, Urango was a test to see how far he’s developed at the highest level. He passed, but Carlos Vilches, Herman Ngoudjo and Randall Bailey didn’t. They may not be prospects, but they were fancied to employ the same tactics to defeat Urango.

Urango pummeled Vilches and stopped him with an absolutely huge right hand in the fourth on Wednesday Fight Nights. It was one of the highlights of 2008, and ultimately got Urango back in the frame for another title shot.

His next stop was the Bell Centre in Canada as he faced Herman Ngoudjo for the vacant IBF title. Ngoudjo had built up a pedigree of being on the wrong side of poor judging against Jose Luis Castillo and Paulie Malignaggi. In a fight where the timekeeper fell asleep, Urango dominated the fight to win via wide unanimous decision, knocking the durable Ngoudjo down twice in round 3 following huge left hands.

Urango was down for the first time in his career in his first defence of his IBF belt, floored by Randall Bailey in the fifth round. In a classic, Urango scored a come from behind kayo victory as he showed his champion spirit to stop the veteran Bailey in the eleventh.

The question that hangs over the March 6 fight is can Alexander fight his fight for 12 rounds? We know the tactics and we know he has talent, but is he mentally tough enough to be disciplined for twelve rounds?

Urango won’t change. He’ll be coming forward in his peekaboo stance throwing shots that would make any fighter quake in their boots. Can Alexander close out the crowd’s boos and resist the urge to trade by sticking to his game plan? Some brave pundits don’t think he can.

Back to tactical corner, Alexander as a southpaw will be on his bike all night. He’s fast enough to stay on the outside, but does he have the stamina to keep with Urango for twelve rounds? Or can he keep the fight at his own pace?

The way to diffuse the Urango bomb is with skill, and Alexander has plenty of it. The style match-up is horrible for Urango too, the flashy and exceptionally quick fighter against the lumbering hard hitting bulldozer.

This issue is bound to be raised post-fight, so I’ll do a Paulie Malignaggi and pretend to be Criswell. When does a referee say enough is enough and deduct a point for over-excessive clinching? Even if he’s the hometown fighter, it’s simply unfair on Urango to take away his prize assets by clinging onto his forearms. If only Joe Cotrez was the man in the middle…

This is Alexander’s ‘welcome to the pros fight’. He’ll be tested, a lot of questions will be answered, and Urango is again the measuring stick to how much potential a prospect carries. This fight is a lot closer than the bookmakers make it out to be, and it’s a great way to start a busy calendar over the next coming weeks.

Prediction – Urango has the power to knock anyone out in this division, he’s a beast. He’s faced the tougher competition, but Alexander is too fast, too slick and just too good for Urango. Don’t rule out the chance of a thriller, but expect another snoozer of a fight with the Berto safety-first tactic put into use. Alexander UD 12