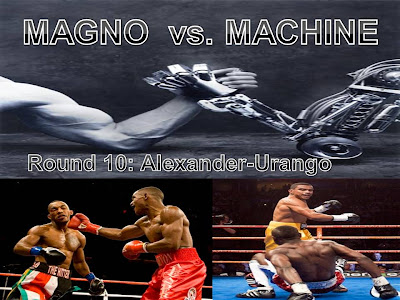 As we reach the conclusion of Magno vs. Machine, boxing guru Paul Magno trails by a KO at round 9 with 3 to play.

And after exactly a month of reflecting and preparation, both Magno and Machine have rattled their brains to conjure up a vital prediction that could have a massive effect on who wins the boxing related battle of Man vs. Machine.

Magno: Devon Alexander is no doubt the more talented boxer fighting at a higher skill level, but Urango’s one-punch power and single-minded aggression makes him a tough opponent…especially for someone with so little professional experience.

The question will be whether Alexander can slip, move and score enough over a full 12 rounds to get the decision and/or survive.

This is a close one; A real brain cell burner, but I’m going with class over force and picking Alexander via tight UD with some real dangerous moments later in the fight.

Machine: It’s a battle of the southpaws as a technically-sound Devon Alexander takes on Colombian battle-axe Juan Urango in a light welterweight unification fight.

The unbeaten Alexander (#6 by The BTBC) will look to use his speed advantage and long reach to pick-off the on-coming Urango. The power punching Urango (#5 by The BTBC) will keep coming forward all night, swinging wild hooks if he can get inside.

Look for Alexander to use his skill-set to gain a big lead on the scorecards, and the Machine is confident that he can keep his nerve and concentration to avoid Urango’s big punches. Devon Alexander wins by unanimous decision by scores of 118-110 X3.