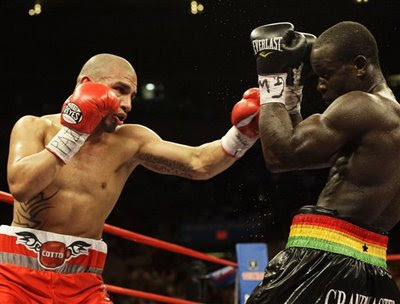 Joshua Clottey has only three losses on his record, all to credible opponents; and on Saturday night, Manny Pacquiao will be the fourth world-class fighter to defeat ‘The Grand Master’. Here’s ten reasons why Joshua Clottey has the odds stacked against him against Pacquiao on March 13.

Talent: The difference in talent is evident. The Filipino has evolved into the perfect aggressive fighter. He’s fast, powerful, experienced, resilient and always in tip-top condition. Clottey is good, but he’s not great, while Pacquiao can be considered as an All-Time Great. Enough said.

Power: If you’re one of many that believes everything Bob Arum said like he was some prophet, you’d think Clottey “is the bigger and stronger man.” That might be true to some extent, but Pacquiao holds all the firepower in this fight. Clottey never really hurt Cotto in their fight, while Pacquiao knocked the Puerto Rican down twice and sent him into survival mode for the final four rounds. Advantage Pacquiao.

Work Rate: One reason why Clottey lost to Cotto was his lack of consistent offence. He retreated in the final stages of their welterweight title fight, and threw next to nothing. Manny is far more active than Clottey, which should result to him winning the round. Smart counter punching isn’t going to cut it if Pacman’s active on March 13.

Speed: In my humble opinion, Pacquiao’s foot speed is more impressive than his hand speed. He darts in and out before a fighter has the opportunity to think about countering. Pacquiao’s blazing-quick punches come from all-kind of crazy angles, which makes him even more mind-boggling. Pacquiao’s mobility should allow him to avoid Clottey’s counters all night. He’s going to be donkey years ahead of Clottey in speed, and for me, I don’t see Clottey being able to foil it.

Tempo: As a result to his defensive style, Clottey sets a relatively low pace to his fights. This raises question marks over his stamina and heart, which probably are a bit rash. Many people point to the dip in performance late on down to a lack of focus. Against Cotto, Clottey seemed to coast instead of ramming home a unassailable lead against a bloodied Cotto. Pacquiao will set the pace in this fight and it should be too fast for Clottey.

Style: Clottey’s 2006 loss at the hands of Antonio Margarito may well have provided Freddie Roach with the blueprint for Pacquiao come Saturday night. Not that Margarito and Pacquiao are similar, in style at least, the Filipino is an aggressive full throttle type of fighter like Margarito, who made Clottey buckle under the pressure after the fifth. Clottey claimed he had broken both hands (even though he didn’t), so again you can decide for yourselves if Pacquiao’s style is Clottey’s kryptonite.

Defense: You might point to Clottey’s defense as an advantage, I don’t. Sure, it will help him block punches and take less shots, but tucking himself behind his gloves will give Manny all the time in the world to throw his whirlwind combinations. Clottey tends to wait until his opponent has stopped punching before throwing his own, which is simply the worst logic in a boxing fight.

Ring Generalship: The phrase ring generalship means a lot of things, one of which is the understanding of the science, and Clottey can sometimes be a bit dopey in the ring. Pacquiao has proven that he can adapt to different situations during fights which every world-class fighter can do, while Clottey on the other hand has shown he can blow away leads for inexplicable reasons. The Cotto fight again is a prime example, but some may look at the Baldomir fight at the turn of the Millennium, where Clottey lead into the tenth before he was disqualified for intentional headbutting. For those who have watched the fight, you may think it was a hometown disqualification. I agree that it was harsh, but when you’ve been warned and penalized a point for it, you don’t carry on. Plain stupidity.

Right Hand: I’ll get technical here. Clottey has a sweet right uppercut, but aside from that his right is very weak, and against southpaws, your right hand must be effective. Sometimes he leads with his right, and when he does he slaps or tries to double up which throws him off-balance and makes him vulnerable to a knockdown. His lack of two-fisted offence is a major concern going into Saturday’s fight.

Corner: For me, this is what has made it impossible for Clottey to win. Anyone with a worse corner than Cotto’s when he fought Pacquiao will struggle. Veteran cutman Lenny De Jesus has been hired, who also worked with Pacquiao in his earlier years. Clottey will be without his regular team for the first time in his professional career. His preferred trainer, Godwin Kotey was refused a visa. His assistant trainer, Daniel Clottey, was also denied a visa. This distraction has surely not helped Clottey during camp, and whoever he has in his corner will be miles behind Roach.

I’ll finish with a quote from The Boxing Tribune’s editor-in-chief, Paul Magno.