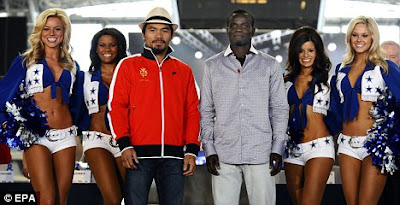 Pacquiao didn’t look as ripped as he did for his November bout with Miguel Cotto, or Ricky Hatton and Oscar De La Hoya fights for that matter. He also looked dry, but I doubt he struggled to make weight. Clottey as always, looked in tip-top condition.

Lightweights Humberto Soto and David Diaz successfully made weight, with Diaz coming in at 134, and Soto at 134 1/4. They will fill the WBC lightweight vacancy left by Edwin Valero, which Diaz held before being knocked-out by Pacquiao in 2008.

Jose Luis Castillo came in at a very impressive 144, which suggests he’s taking this fight seriously. Gomez came in at 145. In my opinion, this fight will be the most intriguing of the whole card.