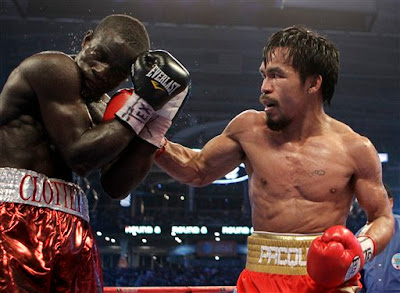 Arlington, Texas- 51,000 attendees at Dallas Cowboys Stadium and those watching via pay per view almost had to check if there wasn’t a chain hanging from behind Joshua Clottey’s back as he played the role of heavy bag to Manny Pacquiao on Saturday in their bout for Pacquiao’s WBO welterweight title.

The bout was pretty much fought at the same pace throughout with Pacquiao (51-3-2, 38 KOs) darting in and throwing quick shots at a Joshua Clottey (35-4, 20 KOs) who seemed more than content to block those shots with hands held high while throwing nothing in return.

Most vexing about the fight was that, on the rare occasions where Clottey did let his hands go, he had success and seemed more than able to do some real damage to the Filipino. Unfortunately for Clottey and his fans, the fighter from Ghana never really chose to put in the work to take the welterweight crown from defending champion, Pacquiao.

Humberto scored two knockdowns in the bout, one in the first and one in the twelfth to seal the deal.

In the opening telecast of the ppv telecast, John Duddy (29-1, 18KOs) put in a workmanlike effort to beat a game, but slightly behind the curve, Michael Medina (22-2-2, 17KOs) via unanimous decision. Judges scores were: 96-93 all the way around.