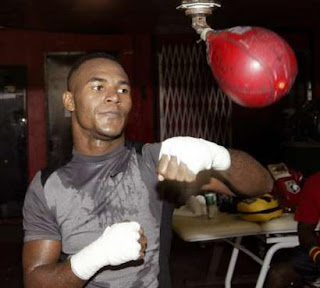 We’ve been here before. At the weigh-in ahead of his hotly anticipated rematch with Ali Funeka, Joan Guzman (29-0-1, 17 KO) staggeringly failed to make weight by nine pounds at the Hard Rock Hotel, tipping the scales at 144 lbs.

Cast your minds back to September 2008, where Guzman unprofessionally failed weight ahead of another HBO date, this time against Nate Campbell. The consequences were much bigger than anticipated, with Nate Campbell filing his bankruptcy shortly after the fight.

The IBF could award Ali Funeka the belt, or make it inaccessible for Joan Guzman if the fight goes ahead, as the South African weighed-in on the lightweight limit, 135. Guzman’s purse should be withheld, but it’s highly likely that the fight won’t go ahead, as promoter Gary Shaw whispered to BoxingScene.

Both Marcos Maidana and Victor Cayo made weight ahead of their light welterweight clash, both weighing in at 140 pounds.

Guzman has two hours to lose the weight, which is virtually impossible. If there’s a breakthrough, it’ll be below.

***A deal was struck between camps allowing the fight to go on – providing that Guzman does not weigh more than 150 lbs. tomorrow morning at 7 a.m. If Funeka defeats the overweight Guzman, he will also be allowed to bring the IBF lightweight title home to South Africa.***