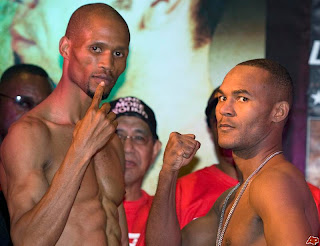 After the farce of yesterday’s weigh-in, both Juan Guzman and Ali Funeka re-weighed ahead of their catchweight fight at the Hard Rock Hotel tonight. Joan Guzman weighed-in at 148.2 lbs, while Ali Funeka tipped the scales at 143.2 pounds.

If your not aware of yesterday’s events, here’s a brief re-cap. Guzman is still a joke. He disgracefully weighed-in at 144 pounds, a staggering nine pounds over the lightweight limit, which Ali Funeka met with no fuss.

According to various reports, Guzman will be penalized 25% of his purse for failing to make weight by the Nevada State Athletic Commission (NSAC). Funeka will receive an additional $25,000 for taking the fight. The title will only be on the line for Funeka.

The fight will be the co-feature to Marcos Maidana’s junior welterweight battle against Victor Manuel Cayo, broadcasted by HBO.