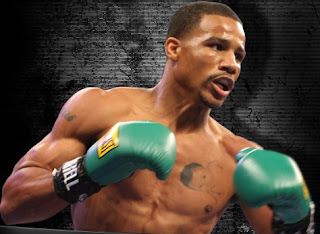 Abraham was a long way behind on the cards in the eleventh round, when Dirrell slipped for the second time on an advertisement logo, and went down with his hands out in front of him to keep him from falling on his face. Abraham saw the perfect opportunity to land a right hand that put Dirrell’s lights out. Abraham was disqualified by referee Laurence Cole, losing for the first time in his professional career.

The disqualification has taken a little bit of the limelight away from something much more important; Dirrell’s coming of age. He used his attributes to his advantage and learned the harsh lessons he learned from the Froch fight in Group Stage 1. Even though he got tagged often by Abraham, he annihilated the Super 6 Boxing Classic leader over ten eventful rounds.

Dirrell floored Abraham for the first time in his career in the fourth, landing a straight right on an unbalanced Abraham. Abraham was down again in the seventh, but referee Cole made the wrong call. However, Cole evened things up as he failed to award Abraham a knockdown when he put Dirrell on the canvas legitimately in the tenth.

This has made the Super Six a lot more interesting, with every fighter still with a strong case in making the semi-final spots. If Abraham would’ve won in Detroit tonight, he could’ve retired on his stool after the first round against Carl Froch and still qualified.

After the bout, Abraham irritatingly claimed that Dirrell was “acting to get the DQ”, which erased any sympathy left for King Arthur. The most frustrating thing for me was that it was getting interesting too, with Abraham getting real close at times to nail Dirrell with those trademark right hands as they approached a nail-biting conclusion.

Next up for Andre Dirrell is fellow Olympian Andre Ward, who first has to tackle the obstacle that is Allan Green. Arthur Abraham will be back at home against Carl Froch, who faces Mikkel Kessler on April 17.