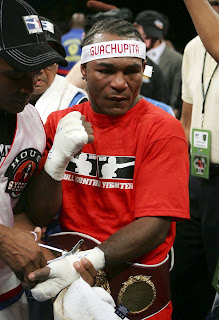 Guzman was just too slick for the flat-footed Funeka, who rarely threatened to punish Guzman when he rested against the ropes. Funeka took a lot of time to find his range, and never quite knew what to do when he got there.

Guzman on the other hand executed the perfect strategy laid out to him by his new trainer Lee Beard, as he waited on the back-foot to catch the oncoming Funeka as he switched from long range to close.

Unexpectedly, Guzman floored Funeka in the sixth with a peach of a right hook to the side of Funeka’s temple. Funeka got up and wasn’t hurt, but it did show that the nine pounds advantage Guzman had at the weigh-in made a difference.

The frustration was apparent in Funeka’s game as he never seemed to catch Guzman at the right time. He desperately began to swing wildly as he realised that the IBF title was slipping from his grasp. The BTBC scored the fight 115-112 in favor of Guzman.

Joan Guzman does not win the IBF lightweight belt as he unprofessionally weighed-in at 144 pounds, nine pounds over the lightweight limit.

The win actually doesn’t help Guzman one jot. His unprofessionalism has put off any promotional company with more than one braincell to even approach him with a fight contract, and I doubt Golden Boy will go looking for one either. I see Guzman rotting away on Golden Boy undercards in Mexico or his native Dominican Republic, but definitely no TV date for a long long time.

For Funeka, he’s in the same situation as he was in November. He’ll feel cheated again, but he’s earned major recognition for his three HBO performances which he has given 100% in every single round. He’s got a little following and he’s in good hands, so I’d expect to see him fight in an eliminator for that IBF title that seems impossible for him to capture.