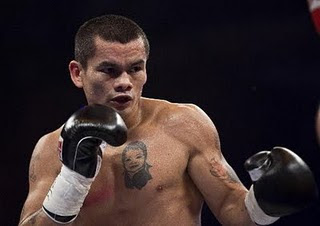 Cayo started well, staying disciplined on the outside and winning the opening round, despite Harold Lederman giving it to Maidana. The second started off pretty much the same, until Maidana began to find his helpless target, who crumbled under a rocket right in the second.

Maidana could smell blood and stalked Cayo to every corner of the ring as he tried to end the fight there and then. Cayo however, landed the cleaner punches in the round, but Maidana’s greater activity topped every bit of good work Cayo did in the third.

Cayo gave up fighting on the back-foot and joined Maidana in the center of the ring for a brawl that had an air of Arreola-Minto about it, but half the weight. Maidana, acting as the thinner Arreola, was catching Cayo, who played Minto pretty well, flush with nearly every single power punch thrown, but Cayo was game as he managed to weather the onslaught to survive the fourth and began to get back into the fight in the fifth.

Maidana calmed down at the beginning of the sixth, which sent Cayo negatively into retreat, which ultimately proved to be his downfall. Maidana only needed to land one crisp body shot, and that was it. Cayo’s resilience had been broken by something relatively new to Maidana’s various choice of weapons, as he’s become a much improved body puncher. The scores at the time of the stoppage were 49-45, 49-45 and 47-47, which shows that Cayo was competitive in one judge’s eye.

Maidana is primed for a title tilt against Amir Khan, but I highly doubt that Team Khan will want anything to do with Maidana after this performance, which I rank up there with Ortiz. Maidana is definitely a top 10 junior welterweight, maybe even top 5, so the future is bright for the Argentinean, who could face Devon Alexander if Khan backs out.

For Victor Cayo, he can return home with his head held high. He gave a credible performance, slugging it out for six rounds against a fierce puncher in Maidana, who’s up there with Ediwn Valero and Arthur Abraham as the pound-4-pound biggest puncher in the sport. I wouldn’t be surprised to see Cayo challenging for a title again, but I don’t think it will be anytime soon.

BTBC House Fighter Daniel Jacobs (19-0, 16 KO) kept up his impressive run for our House Fighters as he destroyed overmatched and an overweight Jose Miguel Berrio (20-5, 12 KO) who quit on his stool after only one round of action. It was a stay busy fight for Jacobs, who’ll be looking to make big strides in 2010.