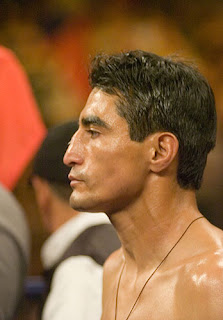 Monterrey, Mexico – It was hardly convincing, but Erik Morales (49-6, 34 KO) won for the first time in five years as he outpointed club fighter Jose Alfaro (23-6, 20 KO) in his native Mexico.

Following a two-and-a-half year layoff, it took time for Morales to come to terms with the challenge he was putting his body through as he looked badly prepared for the fight.

But as the contest got older, Morales quickly found himself in a brutal battle, that was although pleasing to watch for some fans, very hard to watch for Morales die-hards. He took a lot of punches, but also returned a lot of fire, but there was just something not right about the fight, and I didn’t like it.

Morales was involved in a typical Morales fight, and claimed a hard-fought and wider than expected unanimous decision by scores of 117-111, 116-112 and 116-112. With only one eye on the fight as I was busy watching Abraham-Dirrell, my scorecard rounded off to 115-113 for Morales, but as I was concentrating on the bigger fight, it’s a rough score.

It’s hard to work out what’s Morales’ motivation behind this comeback. Is he bankrupt and looking for pesos? Is he looking for revenge against Marco Antonio Barrera, or God help me, Manny Pacquiao? Whatever it is, it’s puzzling.

On the undercard, Chris Henry (25-2, 20 KO) produced a career best result with a stunning first-round kayo victory over former WBA light heavyweight titlist Hugo Hernan Garay (32-5, 17 KO). This was the first time Garay had been stopped in his professional career, and Chris Henry is now at the front of the queue for a mandatory shot against the winner of Shumenov-Uzelkov, which is expected to happen in the Summer.

Heavyweight David Rodriguez (33-0, 31 KO) predictably did his usual thing, stopping another tomato can in Daniel Bispo (22-13, 16 KO) in the second-round of their one-sided bout.

Solis was impressive as he completely outclassed Batawang throughout the six rounds, handing him a pretty heavy defeat in the process. Batawang’s corner did the right thing by pulling him out in the sixth, as he was taking a beating at the time.

As this was an IBF eliminator, I presume that Solis will get a chance to regain his old title back later on in the year against new titlist Carlos Tamara, who pulled off a mighty upset in stopping Brian Viloria in their January fight.

Solis slots right back into the 108 pound picture, while Batawang seems finished at the highest level, and he drops down below second-tier in my humble opinion. I was very impressed by Solis, who looked back to his best against a potentially tricky opponent in Batawang, who he handled with ease.

The 27 year-old Segura had no problmes dispatching Ramos, who was grossly overmatched on the undercard.

Segura, who holds the WBA version of the light flyweight championship, could potentially be set-up to face Solis later on in the year, but I doubt that will happen just yet. If all goes to plan, a potential unification fight could be on the table for Segura and Solis.