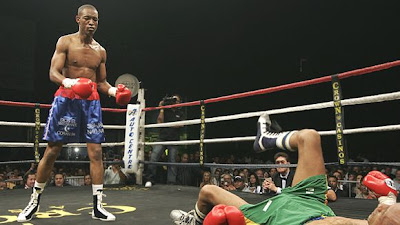 Andre Berto might have headlined HBO’s first World Championship Boxing broadcast of the year, but it was Celestino Caballero who produced the most impressive display on the card, dominating previously unbeaten Daud Yordan to win a near shutout unanimous decision.

Former junior featherweight champion Caballero debuted at featherweight and on HBO, looking excellent and a clear threat to those who currently hold a position in the top 5. He displayed everything in his arsenal in throwing 1,248 punches, connecting with 325, ranging from jabs, to right uppercuts, to wincing body shots. The ‘Towering Inferno’ is a suitable alias considering his 5’ 11’’ frame, the same height as Joe Calzaghe, who fought 50 pounds heavier.

However, despite producing his best display since he crushed Steve Molitor in four rounds, it might hurt his chances of landing a big fight when the time comes to discuss his options.

He’s rumoured to face Cuban sensation Yuriorkis Gamboa on July 24, but I’ll prompt a guess that Bob Arum will hesitate matching one of his brightest stars against the awkward Panamanian after watching ‘El Pelenchin’ last night. The risk of fighting Caballero before the ‘Best Featherweight Showdown’ is one not worth taking in my opinion, and probably in Arum’s mind too.

The danger that Caballero possesses could force Gamboa and Lopez to meet up quicker than expected. The tentative announcement of Summer 2011 from Bob Arum might be brought forward, unless they are entirely convinced that Gamboa will beat Caballero.

One of Caballero’s reasons for moving up in weight was to find these career best paydays and major events, and this could be a real setback for him. Caballero has called out Lopez over and over to no avail, claiming the fight had been signed when it hadn’t. They’ve exchanged a few fiery comments, but it looks from an outsiders’ point of view that Lopez doesn’t want anything to do with Caballero. Why would he? The guy is a handful on a bad day, but he’s a mighty tough proposition for anyone when he’s on song.

If they do decide to avoid Caballero, the excuse for Top Rank is already out, as both camps are already disagreeing over money issues. Warrior Boxing, Caballero’s handlers, claim that they are a long way off reaching an agreement over purse percentage, giving Arum’s PR more than enough to work with.

It was great to see Caballero at his best again, as he hadn’t been at the same level since the Molitor win. This conjures up more excitement in the already crammed featherweight division, which can only be good news for fight fans and Bob Arum alike.