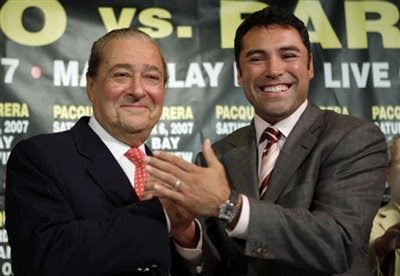 More often than not, the most influential people in the industry are men or women who have never stepped between the ropes and traded punches.

But their opinions make a difference, from the match-ups being made to the unique ideas to revamp the sport. Here are the 10 most influential people in boxing.

1. Bob Arum, chairman, Top Rank – Top Rank has the best stable of fighters and is by far the most innovative. If Arum doesn’t like the contact offered by Showtime or HBO, he’ll spend the money to broadcast the fight on his own, Latin Fury and Pinoy Power to name just a few. We’ve all seen how Arum spins stories so his team can look good, and you can strongly argue that he controls the boxing media.

2. Oscar De La Hoya, promoter, Golden Boy Promotions – The Golden Boy is the most powerful individual former boxer in the sport. He’s the head of Golden Boy Promotions, which, along with Top Rank, is one of the game’s two leading promotional companies. De La Hoya pretty much gets what he wants when it comes to television dates, venues and opponents.

3. Ross Greenburg, president, HBO Sports – HBO are the best broadcasters in boxing, simple as. Greenburg controls the budget, which is four times larger than their closest rival. This allows Greenburg to choose whatever fights he wants to air on HBO.

5. Floyd Mayweather Jr., boxer – Mayweather argues that he’s the pound-4-pound king, which is unclear as of now, but he is definitely the biggest draw in the sport. As he charismatically says, “all roads lead to Floyd Mayweather.”

6. Al Haymon, manager – Haymon handles Mayweather’s career, giving him the best options for the least risk. He seems to have healthy connections with HBO, which not many managers and promoters can say in the game today.

7. Ken Hershman, vice president of Showtime sports – Hershman doesn’t have the budget Greenburg has, but some might argue he does a better job. The Super 6 Boxing Classic has earned him the highest respect from fans, easily making him one of the most influential men in the sport without mentioning other attributes.

8. Manny Pacquiao, boxer – Pacquiao has risen to become a box office hit, recognised as the best boxer on the planet at this point in time. His influence can be seen in his stranglehold in negotiations, with his contractual demands displaying his dominance over fighters. His large fanbase also gives him power.

9. Bruce Trampler, Top Rank Matchmaker – One of the masterminds behind Pacquiao’s rise is Trampler. His mapped plans for any Top Rank fighters are usually the best option possible, and Pacquiao is a prime example.

10. Jose Sulaiman, WBC President – The impact Sulaiman can have on promoters by just making a stance is ridiculous. Nobody appreciates his work to the extent of others on the list, but his reward for keeping the WBC afloat is power.