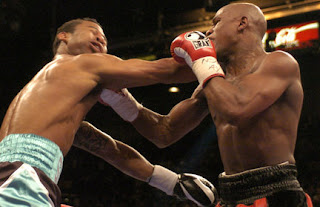 Las Vegas, NV- After an uneventful first round, Shane Mosley (46-6, 39 KOs) connected with a straight right hand in the second that buckled the knees of the undefeated Floyd Mayweather Jr. (41-0, 25 KOs); He followed it up seconds later with a right hook that nearly dropped the trash-talking welterweight from Las Vegas by way of Grand Rapids, Michigan.

Floyd Mayweather learned early on that “Sugar” Shane Mosley was not a faded veteran and that, indeed, he would be forced to step it up to elite mode.

The rest of the bout could be considered a modern day masterpiece, featuring a more aggressive than usual Mayweather mixing things up and utterly outclassing a top 3 or 4 pound for pound fighter in Shane Mosley.

Mayweather, for the last ten rounds of the fight was simply a step ahead and a class above a “Sugar” Shane who, for the first time in his career, looked to be doubting himself and questioning his presence in the fight.

Employing his usual fluid shoulder roll, followed by accurate potshots and controlled spacing, Mayweather turned rounds three to twelve into one long session, with Mosley trainer, Naazim Richardson, at one point hinting at stopping the fight between rounds.

In the pay per view opener, Said Ouali (27-3, 19 KOs) stopped power punching Hector Saldivia (31-2, 24 KOs) in the first in a wild bout that saw both fighters hit the canvas.