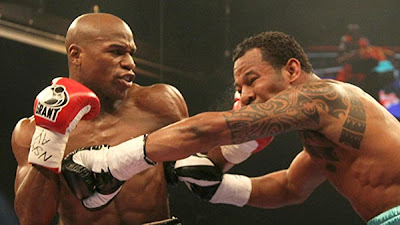 * I’m sorry… if you don’t appreciate Floyd Mayweather’s in-ring work and the supreme old school professionalism that he exhibits fight after fight, boxing is obviously not for you. May I suggest mma or WWE?

* Wasn’t it refreshing to see a major ppv fight not burdened by catchweight stipulations and weight demands?

* I haven’t seen this posted anywhere else, but referee Kenny Bayless did an excellent job with two fighters who are notoriously hard to officiate. One only wonders how Joe Cortez would’ve done in the same situation.

* Mayweather saved $675,000 in sanctioning fees by telling the WBA to keep their belt to themselves…Hopefully this is a trend all fighters will follow. Then, we may be able to start over and get a real sanctioning body.

* Talk of Mosley being old is the epitome of Mayweather hating. Up until last night’s contest, Mosley was rightfully considered the top welterweight in the world and was deemed “too good” by Freddie Roach when Pacquiao was deciding on an opponent.

* That straight right hand that Mosley landed in the second round would’ve leveled ANY fighter from 154 on down…Credit goes to Mayweather’s super human physical conditioning and his ability to think on his feet…even when knocked loopy.

* Larry Merchant, IMO, crossed the line with the Mayweather hate speech…Everything out of Merchant’s mouth was a crack disparaging Mayweather, the fight, and the very event he was paid to cover…

There were more verbal jabs at Mayweather than actual jabs on the whole telecast…Principally, the whole “Artful Dodger” sermon before the main event…Merchant’s been around the block and he knows better; he’s not some chat room moron…He has to know the reason behind fights with Margarito and Cotto not getting made, yet he pushes forward with the name calling…It really crossed the line from stubbornly critical to patently unprofessional.

This was the first time where Merchant seemed almost pathetically burdened with prejudice…Normally, I would be up in arms about this kind of biased coverage, but last night I felt sorry for Merchant…He’s come to the end of his run and he’s not going out gracefully…

* Ever since Mayweather mentioned Mosley’s nose job, I can’t stop looking at it…

* Daniel Ponce de Leon on the undercard is quite possible the ugliest, sloppiest-looking fighter on the world stage. His newly-developed jab looked about as graceful as a boxing glove stuck on a metal pole, tied to a rusty bulldozer…but it was effective.

* I’ll reserve judgment  on Mexican phenom, Saul “El Canelo” Alvarez…If a blown up, fringe-contending lightweight like Jose Miguel Cotto can stun him, who knows what a top 20 welterweight would do?

* Mayweather operates on two speeds: “Better than the rest” and “All-time Great.” He’d been cruising on the first speed for a number of years, but getting caught and hurt by Mosley forced him to shift into second…and Mosley simply couldn’t keep up.

* Do you realize that Mayweather, in his last two fights, has fought two Top 4 pound for pound fighters and has lost a combined total of two rounds?

* Can anyone not at least seriously consider putting Mayweather back at #1 on the pound for pound list?

* Is it safe to say that nobody will be enforcing the rematch clause in this one?

* Oddest image of the night: A puzzled blonde kid sitting on Muhammad Ali’s lap…I don’t know the back story or how the kid got there, but it was a very surreal moment.

* Hands down, the silliest post-fight theory to date: Accusations that Mayweather-Mosley was somehow fixed.