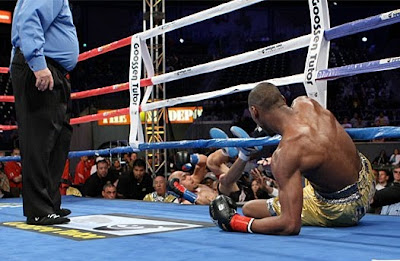 In the latest Kermit Cintron (32-3-1, 28 KOs) drama, three cautious, uneventful rounds with Paul Williams (39-1, 27 KOs) were followed by a fight-ending collision in the fourth which saw Cintron fly from the ring, bounce off the table and land on the arena floor. After a couple of minutes of Cintron semi-writhing on the cold floor, he was carted off on a stretcher and taken to the hospital as a precaution.

The frustrating thing is that the fight was just starting to pick up when it came crashing to an abrupt halt. Per California commission rules, the fight was judged based on the three complete rounds and the partial fourth.

Williams came away with the mega-frustrating split decision.

Predictably, Cintron issued a statement about being outraged, petitioning the commission for a reversal of the decision and threatening to walk away from the sport for good if his demands aren’t met…blah, blah, blah…Don’t let the door hit you on the way out, Kermit… 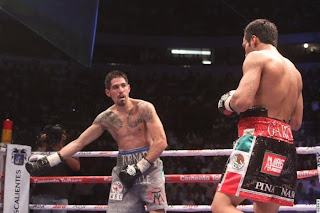 Margarito’s opponent, Roberto Garcia (28-3, 21 KOs), was so obviously mismatched that most of the interesting moments of the bout came from Margarito, himself, as he mugged to the camera, windmilled punches and mimicked being a bull fighter in the face of a painfully slow and stiff Garcia.

Margarito scored a flash knockdown in the first and Garcia suffered couple of point deductions for headbutting in the eighth and a low blow in the tenth, but that was the only real noteworthy happenings in Margarito’s easy Unanimous Decision victory.

After the fight, Margarito indicated that a bout with Manny Pacquiao was just about a sure thing.

On the undercard, Jorge Solis (39-2-2, 28 KOs) dominated Mario Santiago (21-3-1, 14 KOs) via wide UD. The first two rounds looked promising, with both fighters landing significant shots. Eventually, though, Solis settled into a groove and dominated from the outside with long, straight right hands against the southpaw, Santiago.

Also, Urbano Antillon (27-1, 20 KOs) won a tougher than expected UD over Rene Gonzalez (27-1-1, 21 KOs). The scores were wide and it was scored a near shutout, but Gonzalez did have his moments.

Osaka, Japan- Mexican, Hugo Cazares (31-6-2, 22 KOs) went into enemy territory and avenged a prior loss by taking the WBA Super Flyweight title from Nobuo Nashiro (13-2-1, 8 KOs). In what could only be described as an early morning cock fight, the action was fierce and back and forth with Cazares doing enough to take the unanimous decision.