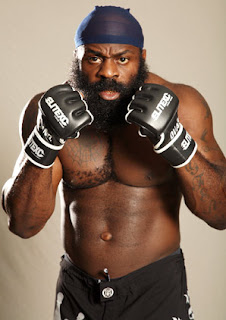 Even if you’re not an MMA fan of any sort, you can’t avoid hearing about Kimbo Slice.  Slice, in his few years of popularity has went from bodyguard, to street fighting “legend” to mixed martial artist, and now to purgatory.  In case you haven’t already heard, Kimbo was cut from the UFC roster (so says Dana White) after Saturday nights TKO loss to Matt Mitrione. “What does this have to do with boxing”? you ask?  Nothing on the surface, but it makes me wonder if we’ll be seeing Kimbo join our beloved sport now that he’s failed twice in the MMA circuit.

Last year prior to his appearance in “The Ultimate Fighter” Season 10, it was rumored that Slice was taking up boxing and leaving MMA behind.  Some were supportive, some were indifferent, and some were laughing their asses off.  Sure, the guys good with his fists and has a good punch, but that’s never a guarantee that he’ll do even remotely well as a professional boxer.  We’ve seen it before, we’ll see it again, and it never looks pretty.  So what are the chances?

As it stands now, I can see it happening.  Slice has suffered two embarrassing losses in his short MMA career and now has no where to turn.  He’ll never be taken seriously in mixed martial arts again (if he was at all) so unless he’s content with fighting for a fringe MMA promotion, boxing is all that’s left.  Unfortunately boxing fans won’t take him seriously either and he’ll more than likely be hard pressed to find a promoter that will put any serious effort into building a career for him…but it can be done.

Kimbo seems like a genuinely nice person, who wants nothing more than to make a good living for his family and do well in combat sports.  Unfortunately passion isn’t always enough and already into his 30’s, success as a fighter of any sort is remote.  Even with the sorry state of the heavyweight division these days any C level boxer that can move his feet will embarrass him even further, having him end up as the latest version of Tye Fields.

I seriously wish Kimbo well in what ever field he chooses to pursue and hope he’s successful.  Whatever your opinion of him as a fighter, he deserves respect for getting the cage and will be deserving of more respect if he chooses to give boxing a go.  How’s he’s viewed afterward remains to be seen.