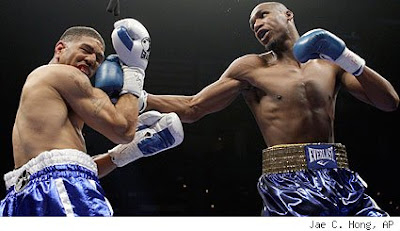 “I don’t see anything special in Paul Williams; He is very beatable.” –BoriBlaze1, veteran member of The BTBC Fan Forum.

Lost in the spectacle of Kermit Cintron’s Superfly Snuka ring dive act was the fact that, up to the frustrating end of their bout Saturday, boxing’s #3 pound for pound fighter had looked quite unspectacular over three rounds. As a matter of fact, he was looking downright pedestrian.

This is no new trend for Paul “The Punisher” Williams.

In his last bout against Sergio Martinez, Williams also looked less than spectacular in the same manner that we saw him show up for his first fight with Carlos Quintana, which he ended up losing.

Some may use the explanation that Williams’ lackluster performances were due to the high level of opposition he fought or the styles of his most difficult opponents, but Williams’ fluctuations go beyond simple match-up issues.

Throughout his career, Williams has struggled with the balance between being a world class fighter and a world class attraction. As a result, he’s become an in-ring schizophrenic, becoming less and less of what made him special in an effort to attract the attention and paydays he lusts for.

The smooth-moving punch machine with the tricky head movement from his earlier days has been replaced by a lunging, laboring, flat-footed glove-pusher.

Granted, even a diminished Williams with an identity crisis is good enough to be classified among the sport’s elite, evidenced by the fact that a sloppy version of himself was good enough to beat a prime, motivated Sergio Martinez (even if you thought Martinez won, nobody can deny that it was a very close encounter).

What Paul Williams needs to understand is that fans are fickle and that chasing after their approval at the expense of his own identity will only result in frustration. Even if he were able to somehow persuade them to turn him into a major draw, they’d be gone the moment he loses…that’s the nature of the beast in boxing.

Instead, Williams needs to be who he is, fight how he must and let the fans decide on their own whether to love him or not. As long as he keeps winning in the manner that he should, the buzz will grow and the paydays will gradually line themselves up.

Otherwise, Williams will get beat and will find himself forgotten by all those fans he tried so hard to win over.