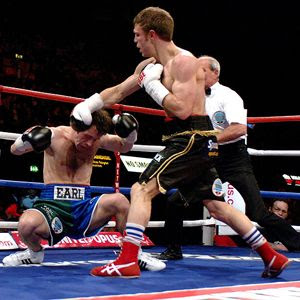 A monster left hook and a barrage of brutality was enough for Michael Katsidis (27-2, 22 KO) to score a devastating third-round technical knockout win away from home against Kevin Mitchell (31-1, 23 KO) to position himself as a mandatory for the Marquez-Diaz II winner.

Katsidis landed the harder shots in the opening two rounds, and in the third, Katsidis staggered Mitchell very early and kept up the pressure to take him out at the end of the third.

Mitchell didn’t back down though, deciding to trade as his legs continued to wobble. But Mitchell was outclassed as Katsidis continued to stun the Englishman with heavy shots before referee Dave Parris stopped the bout with Mitchell still unsteady.

On the undercard, Derek Chisora (13-0, 8 KO) blasted out Danny Williams (41-9, 31 KO) in the second round. Williams weighed in at a career-high 275 pounds and offered no resistance in what is likely to be his last professional contest.