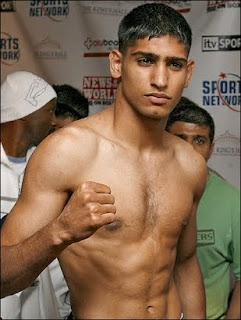 New York, NY- Paulie Malignaggi and Nate Campbell, two of boxing’s best talkers, had the general public believing that they had a real chance of beating their younger, more naturally gifted rivals on Saturday night.

However, once the bell rang and the fights actually began, we saw that talk is indeed cheap.

From the opening bell on, Khan proved to be too strong, too fast and too disciplined for his rival. Malignaggi was hit hard and often as he tried to box, but simply had no solution for Khan’s hand speed and physical strength.

After ten and a half one-sided rounds, referee Steve Smoger stopped the contest after a particularly hard shot sent Malignaggi to the ropes.

Nate Campbell (33-6-1, 25 KOs) spent most of the fight trying to chase a mobile Ortiz down while getting caught with sharp counters in return. “The Galaxxy Warrior” never could corner Ortiz and failed to apply the pressure that seemed to be part of his game plan. The only knockdown of the fight was against Campbell; a dubious flash knockdown in the first.