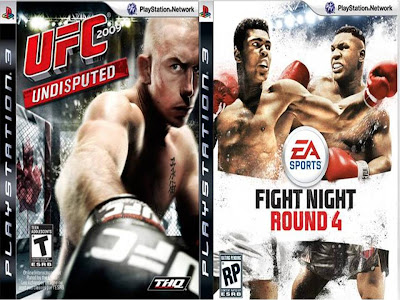 UFC 2010 Undisputed was released to widespread critical acclaim and fanfare from fans and journalists alike this week. Is it a coincidence that it has been released just a few days before the biggest grudge match in UFC history airs on PPV? Of course not.

Fight Night Round 4 was to be the jewel of the boxing series, the first fight night in three years. It was eagerly anticipated with fan forums buzzing with wish-lists, unconfirmed roster rumours and overall game play changes.

Then EA dropped their bombshell, there would be no button configuration in the game. Those fighters you would normally associate with the fight night series and boxing in general would not be included in the retail version of the game. Instead, should you want to own Oscar De La Hoya, James Toney (middleweight version) or Bernard Hopkins you would have to pay a combined total of around $15. Also there is no Floyd Mayweather, no David Haye, in fact there are very few of the top current crop of boxers in the game. Can you imagine UFC not having Lesnar, GSP and BJ Penn? Of course not because that would be stupid.

I am not even commentating on the Online game play, it was non-existent at time of release, EA used the fans as beta testers.

The commentary in Fight Night is tedious and repetitive, once you have played the game with around 8 different fights there is nothing that you have not heard at least twice. Couple that with the ESPN plugs and it becomes unbearable. There is no education from the commentators, they don’t really explain why one fighter has changed his game plan, or why someone has almost exclusively worked the body. They don’t explain the nuances of the sweet science, and one wonders if EA really care about the state of the game.

Compare that to UFC 2010. The first thing you notice when playing the game on the PS3 is the exclusive movies. Low and behold there you find some of the biggest fights in UFC history including two legendary wars. UFC 2010 is the undisputed winner.

The whole UFC game is one big promotional tool. The game itself is a pretty good game to be honest. THQ have integrated online fight camps, where you can meet up with online friends and train together to improve both of your fighters. THQ run online tournaments where you can earn actual prizes, which range from signed memorabilia to a UFC mug. Even if you lose in the first round, you still earn credits. Enough of which will eventually allow u to purchase UFC memorabilia.

The whole game is designed to promote the UFC product, no detail has been left unchecked. You get the feeling that Zuffa ordered THQ to spare no expense. They see the bigger picture, a great UFC game that hooks non-UFC fans eventually leads to more PPV sales and much more exposure. In order to bring in new fans, you have to have an outstanding product. Zuffa understood this and reacted accordingly.

Possibly the biggest promotional aspect of UFC 2010 is the commentary. Every move is covered with the utmost accuracy. When you counter an opponent the commentators explain how and why it happened. The commentary is intended to educate fans and ease them into the MMA world.

Zuffa saw exactly where EA had failed, and trod on a different path. UFC will no doubt get an extra few hundred thousand PPV buys for the next few months. It will die down eventually, but if this game permanently increases UFC PPV buy rates by 50,000, the game did its job.

Maybe it’s time that Top Rank and Golden Boy got together and worked out the gaming industry for themselves, instead of allowing EA Sports to just make some money now and again. Don King attempted with his Prizefighter game, but it didn’t take-off. With the marketing brilliance of both leading promotional companies, could they finally give something back to the fight fans?