Who said that the US fight scene was dead? This list may very well be the most solid assortment of American boxers in a very long time. The “Stars and Stripes”  still has plenty of quality fighters on the main stage and many more on the horizon. In honor of the 4th of July, here’s a look at America’s 10 best fighters.

After his complete and total dismantling of Shane Mosley, is there any doubt that Mayweather belongs at the top of this list? Without question one of the best fighters of this era, Mayweather’s limits seem only to be those of the self-imposed variety. In terms of resume, very few can compare…When it comes to skill and ability, nobody’s close.

Williams is a 3-division, simultaneous mesh of bravery, activity and conditioning. His resume would be a lot fatter if top fighters were actually willing to take him on.

Until further notice, the 175 lb. division belongs to “Bad” Chad. With two wins over Antonio Tarver, two over Glen Johnson and solid wins over Tomasz Adamek and Eric Harding, Dawson is legit top dog despite holding none of the recognized world straps. Jean Pascal is next for Dawson.

If all champions had the work ethic and integrity of Bradley, the sport would be vastly improved. Technically, Bradley is maturing as a fighter and has become a more seasoned pro than when he first burst upon the world scene. Combine that with supreme physical conditioning and a real, gritty fighter’s attitude…and you have something special.

For the longest time, Ward was regarded as a bit of a let-down considering that he was an Olympic Gold Medal winner. Recently, though, Ward has taken a giant step forward and has really made his mark with dominant wins over Mikkel Kessler, Allan Green and Edison Miranda.

Berto gets ripped for his deal with HBO and his Twitter-friendly persona, but he deserves to start getting some respect. Wins over guys like Luis Collazo and Carlos Quintana prove that Berto is a legit, world class fighter.

Only Mayweather has put on a more brilliant and masterful performance recently than Alexander’s win over Juan Urango. In that bout, and in his encounter with Junior Witter, he’s shown incredible proficiency and poise beyond his 23 years. Alexander has outgrown the “prospect” designation and is now rightfully regarded as one of the sport’s best.

The old master hasn’t looked so great in his last two performance against sub-par opposition, but remember, B-Hop is only about 18-months removed from his one-sided beating of Kelly Pavlik and, until proven otherwise, always seems to rise to the occasion in big bouts.

Despite the loss to Floyd Mayweather in May, Mosley is still the same fighter who dominated Antonio Margarito and the same warrior who has been a staple in the Welterweight-Jr. Middleweight class and has, only once, been beaten soundly.

This kid has skill and he’s just starting to make his mark in the 168 lb., Super Six Tournament. As part of the tourney, he’s already beaten Arthur Abraham and should’ve gotten the nod against Carl Froch. Next up for Dirrell is a showdown with his good friend, Andre Ward.

Disagree with this list? Let me know where I went wrong…Comment here or at Boxing’s First Troll-Free Fan Forum, The BTBC 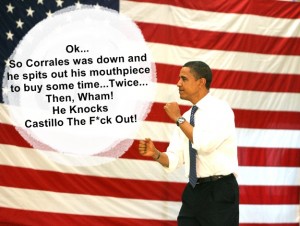