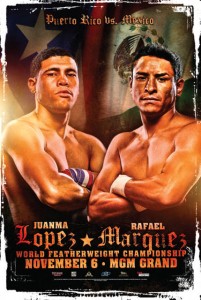 Everything the critics say about Rafael Marquez is true.

The 35-year old Marquez is not the same after his brutal, almost inhuman series with Israel Vazquez. Some would call him shot, others prefer the more diplomatic, “shopworn.”

It’s also true that Marquez is a natural bantamweight fighting two full divisions above his optimal weight against, arguably, the biggest puncher at featherweight.

Add Juan Manuel Lopez, a true star in the making and reigning WBO featherweight champ, into the equation and a devastating loss seems like a foregone conclusion for the Mexico City native. It’s no wonder Marquez is a +250 underdog and, according to the experts, a sure thing not to see the championship rounds.

But, while everything said by the critics is true, there are a couple of other truths that shouldn’t be ignored.

Juan Manuel Lopez has never, in his 29 fight career, fought anyone as technically perfect or as focused as Marquez. Forgotten in the wars with Vazquez is the fact that few fighters in the game are as fundamentally sound as the two-time, two-division world champ. And when it comes to focus, Marquez has kept the same steely-cold intensity throughout 44 fights and during the best and worst of a professional career spanning 15 years.

Juanma will also be dealing with the biggest power threat he has faced since knocking out Daniel Ponce de Leon in the first round of his first title fight in 2008. 35 of Marquez’s 39 wins have been via KO/TKO and it’s not out of the question that he will land some good, clean shots on a chin that has been dented several times before.

Lopez has faced the dogged, the slick, and the powerful before, but he’s never fought someone who can put all three together in the form of one well-rounded complete fighter. The biggest question of the bout will be whether Marquez has enough left to handle the physically gifted Puerto Rican and hang in there long enough to drag Lopez into the later rounds.

Another question rests in the mind of a 27-year old burgeoning superstar who sees a faded, shot opponent standing between him and some major paydays in the near future.

Lopez’s major flaw has been his lack of focus, both in training and in the ring. Like many talented, young athletes, his mind has a tendency to wander, something that nearly cost him his title against fringe contender, Rogers Mtagwa, a year ago at Madison Square Garden. Lopez was nearly knocked out in the championship rounds of a bout that he was clearly winning and, truthfully, the referee would’ve been well within his rights to stop it because of the one-sided beating being absorbed.

Already making comments about not knocking Marquez out too early “so the fans can see it and enjoy it,” it’s easy to envision an overconfident Juanma, with visions of Yuriorkis Gamboa and Chris John in his head, walking into something big or dropping a few rounds and having to do something riskier than planned.

By reviewing the facts and analyzing the tangibles, Juan Manuel Lopez should win and should do so impressively, but boxing is the theater of the unexpected and if anyone is able to pull off the upset, it’s a guy like Marquez.

“This fight is something that I need, I want and that I’m capable of doing,” Marquez said during Lopez-Marquez media day. “It’s probably the most important fight of my career.”

As Mexicans wind down celebrations for November 2nd’s El Dia de los Muertos , a celebration of  loved ones who have passed away, Rafael Marquez is looking to prove on November 6th that the reports of his own career death have been greatly exaggerated.