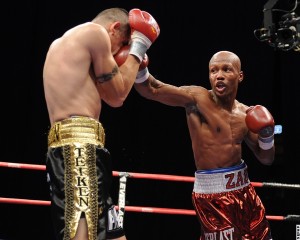 There are few fighters who can frustrate an eager fan base more than Zab “Super” Judah.

The Brooklyn native has all the ability and all the tools to be a major player in the game. Yet, here he is, 14 years into his career, still sitting on the bottom rung of elite status. Like Andrew Golota and, more recently, the post-Hopkins version of Kelly Pavlik, Zab’s natural gifts and money-making potential seem to be stifled by some issue deeper than what can be handled in the musty aura of a boxing gym.

Sometimes, the critics go overboard and the 2-division southpaw champ gets automatically pegged as a simple-minded, self-defeating fighter– and that was a hard point to argue in the past, when Judah was dropping a very winnable fight against Carlos Baldomir and finding a way to lose his first meeting with Cory Spinks.

But the Zab Judah of the last four years or so, while going 5-3 with one no contest, has fought hard and earnestly in relatively close encounters with Floyd Mayweather, Miguel Cotto, and Joshua Clottey. He was strong and competitive in all of those fights, but just couldn’t get over the hump. This wasn’t the Zab Judah of 2001 who got clocked and put to sleep in the second round by Kostya Tszyu while daydreaming.

He fought his heart out against Cotto until the very end and he came as close as anyone, with the exception of Jose Luis Castillo, to beating Mayweather. His bout with Clottey was also a close affair until a cut over his right eye, ruled as the result of an accidental clash of heads, closed the show in the ninth round.

In a lot of ways, Zab Judah is an enigma; A mystery even to himself. To call him an underachiever would be fair– anything harsher is probably closer to message board rhetoric than reality.

But labels are hard to shake and, at this point, nothing short of an impressive win over an elite-level opponent is going to allow him to ditch the bad reputation.

Truthfully, it’s easy to pick on Zab. The guy is a fabulously talented athlete who should have bigger trophies than Junior Witter, DeMarcus Corley and a rematch win over Cory Spinks on his career mantle. Also, who couldn’t pick on a guy who blasts cyberspace with ridiculous Ustream video broadcasts and inane Twitter banter?

But now, a self-proclaimed “new” Zab Judah is moving down from the welterweight division after six years of competing in one of boxing’s glamor divisions. He’s moving into the jam-packed junior welterweight division and is looking to make one last serious run at a world title and, perhaps, at establishing a better legacy than the one that currently awaits him after retirement.

The truth is that the 140 lb. class doesn’t need Zab Judah. There are already plenty of name fighters and plenty of quality bouts to make, but he does add intrigue to an already explosive division and, unlike many American fighters these days, he can still sell tickets.

This Saturday, November 6th, he meets his first real test at 140 in the form of the hard-hitting Argentine, Lucas Matthysse. The slugger from Buenos Aires is still unproven with only a TKO win over faded Vivian Harris to prove his worth, but he’s a blue collar worker with a big punch. If anyone can test the seriousness of Judah’s campaign at 140, it’s Matthysse.

The bout is being billed as an IBF & WBO Eliminator for the #2 spot, so should he get by Matthysse (and that’s no sure thing), he’ll just be a step away from a shot at IBF/WBC champ, Devon Alexander or WBO titlist, Timothy Bradley. (Note: The IBF has announced its intention to strip Devon Alexander if he goes ahead with his bout with Bradley. If/when that happens, the winner of Judah-Matthysse would face the IBF’s #1 ranked Kaizer Mabuza for the title) And he’d certainly be a viable alternative to face the winner of January’s Bradley-Alexander clash if a deal with the winner of the upcoming Amir Khan-Marcos Maidana contest can’t be made.

There is no shortage of fights to be made at jr. welterweight. Aside from the foursome of Bradley, Alexander, Khan, and Maidana, there are the 2nd tier players like Victor Ortiz, Lamont Peterson, Andreas Kotelnik, and Kaizer Mabuza (among many more) who could provide for great action against a reinvigorated Zab Judah.

The question is whether he’s really serious this time about closing out a shaky career with an elite-level win or if he’s just wasting everyone’s time.