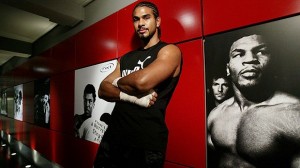 Also Featured at The Queensberry Rules

When the brash, trash-talking London native, David Haye, first moved up from cruiserweight dominance to invade the heavyweight landscape, he carried the hopes of an entire boxing public with him.

The Klitschko brothers, while unfairly ridiculed and marginalized at times, definitely aren’t the most exciting or most marketable of heavyweight champs. The division has stagnated under their rule; in part because of their utter dominance over the current crop of big boys, but also because of their inability to draw fan interest West of the River Rhine.

David Haye brought his swagger into the picture by immediately confronting Wladimir Klitschko on an escalator before a Klitschko press conference in London.

The incident, posted on YouTube and spread throughout the media, made Haye an instant press magnet and, in some circles, a bit of a cult hero. Nobody had seen such heavyweight theatrics since Tyson was threatening to eat opponents’ children.

The Haye-Klitschko confrontation also brought back remembrances of another small heavyweight with a big mouth, quick hands, and the guts to call out the reigning “baddest man on the planet.”

Back when Muhammad Ali, then known as Cassius Clay, challenged and subsequently stalked and harassed champ, Sonny Liston, the fans thought that the 22-year old “Louisville Lip” was out of his mind. The kid taunted and ridiculed one of the meanest, toughest men in the sport, turning the brooding slugger from St. Louis into the butt of his jokes. Most considered this a bad move on the part of the upstart challenger. After forcing Liston to submit in seven rounds, Ali not only became the champ, but also a certifiable star with one foot on the path to legend status.

Surely, this was Haye’s plan as well; Verbally humiliate the Klitschkos, make them burn with rage, and then coolly pick them apart inside the ring with speed and precision. All the nasty interviews, the trash talking, even the silly t-shirts featuring the decapitated Klitschko Brothers– It was all a psychological ploy to slay the beasts before even stepping into the ring.

Unfortunately, somewhere along the way, Muhammad Ali morphed into Floyd Mayweather jr. and the long- awaited (and much needed) Haye-Klitschko bout is no closer to being signed now than when Haye first stepped on to that escalator with the reigning WBO/IBF heavyweight champ back in 2008.

Lost in politics, contract disputes, and unprofessional ego-driven stalling tactics, Haye-Klitschko is buried beneath so much ill will that it seems unlikely both sides will ever come together.

Sadly, on the road to super-stardom, Haye began learning at the alter of the modern day pugilist who has become more star than fighter, more businessman than warrior.

Taking a page from Mayweather, “The Hayemaker” now alternates between adolescent bravado and fits of arrogant silence, expecting the boxing world to hang on and put itself on pause while waiting for him to live up to his own words.

When the second Haye-Klitschko negotiations fell apart a few months ago over the issue of TV rights, it was Klitschko who went to the press and made his case directly to the fans. Haye remained silent, reminiscent of the way Mayweather disappeared from the public eye when Bob Arum was issuing a public deadline for him to sign on for a Pacquiao bout.

The public wanted to hear both sides of the story in both cases, but Haye and Mayweather refused to acknowledge the public demand and, instead, opted to rub elbows with other celebrities and brag on Twitter about the incredible lives they lead.

Haye would later make public statements regarding the breakdown of the negotiations, but well after the fact and after the public perception had already been shaped by Klitschko. In the eyes of most, the hunter had become the hunted and Klitschko, like Pacquiao in the Mayweather debacle, was essentially off the hook.

Because of the misguided arrogance of Haye and Mayweather, Klitschko and Pacquiao would be free to move on to lesser challenges without suffering the repercussions of not fighting the most dangerous and most logical challenger out there. It also meant that Haye and Mayweather would be cut off from the one fight they desperately needed to affirm their greatness.

David Haye began his career honestly and earnestly, working his way to win three of the four recognized world cruiserweight titles. Even as a heavyweight, his wins over Monte Barrett, Nikolai Valuev (for the WBA heavyweight title), and John Ruiz are as solid and as respectable as any other fighter out there not named Klitschko.

But at some point, someone whispered in his ear that this is 2010 and fighters are supposed to take the easy route and string the fans along. It sure seems that Haye has begun to model himself and his career after those of the sport’s current crop of stars–bad role models, indeed.

Now, the only fight that matters at heavyweight is lost and Haye will be taking on the laughably undeserving Audley Harrison this Saturday, November 13th while Wladimir Klitschko meets the unqualified and unproven Dereck Chisora in December.

The fans were ready and willing to embrace Haye and turn him into the next big thing– the heir apparent to Manny Pacquiao’s reign as mainstream crossover. Instead, he’s just another one of those spoiled fighters, letting a few bucks get in the way of giving the fans what they crave.

Maybe Haye and the rest of the modern day boxers should look back to the cocky Cassius Clay of 1964– Fighters become real stars and get to call the shots only after they win the big one.

So, Where is David Haye?