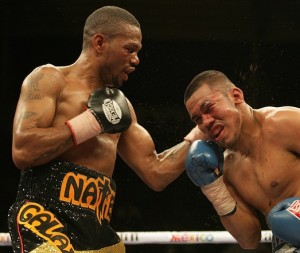 Nate Campbell never even set foot in a real boxing gym until he was 24 years old; He made his pro debut about four years later, a month shy of his 28th birthday.

At an age where most smaller fighters are already on a downward slope when it comes to career trajectory and physical development, Campbell was taking his first lumps as an unknown, unrepresented four-round afterthought.

With a very limited amateur career, a full-time job to maintain, and a family to feed, Campbell eventually worked his way up the steep ladder of boxing success. The hard work and career let-downs would give “The Galaxxy Warrior” true grit and old school ring smarts, leading him to a run as a three-belt lightweight champion of the world.

If anyone had written this as a Hollywood screenplay, it would be dismissed by hardcore boxing fans as pure fantasy:

A 24-year old warehouse worker at Winn-Dixie, father of three, shadowboxes during his breaks and is encouraged by his co-workers to try boxing. He then goes on to win world titles and, over the course of a ten year career, appear on every major TV boxing outlet.

Pushed into the foster care system at seven years of age, the product of a family torn to pieces by alcoholism, and having attended 15 different schools by the time he was 17, Campbell could’ve fallen to the typical evils that plague those with less than a firm base early in life.

Instead, Campbell used his children and his faith in a higher power to push him through to places where nobody believed he could go.

Along the way, losses to Joel Casamayor, Robbie Peden, Francisco Lorenzo, and Isaac Hlatshwayo were the prices paid for learning on the job, but every loss served as a life lesson. And the power brokers in the sport made sure that he earned every bit of success that he got– There were no cuts to the front of the line for Nate.

Campbell, like Bernard Hopkins, was never a pampered amateur treasure and was never instructed in the PC world of media relations and boxing politics. He always spoke his mind and, also like Hopkins, paid the consequences for his honesty.

Fans’ opinions were divided about his candor and the sanctioning bodies never bent over backwards to give him the opportunities he deserved, but he still plugged away.

His crowning glory came on March 8th, 2008 when he walked into the sweltering heat of Cancun, Mexico, a 4 to 1 underdog, and beat feared WBO/WBA/IBF champ, “Baby Bull” Juan Diaz.

Campbell would rough-up and manhandle the 25-year old buzzsaw, taking Diaz to war and wresting the belts from the champ via split decision in a hostile, wildly partisan pro-Diaz atmosphere.

Instead of basking in the glory of a well-deserved victory, the next two years of his career would get bogged down in promotional conflicts, weight issues, and the gradual breaking down of a pro athlete in his late 30’s.

Still, he managed one last thriller: a twelve round majority decision against Ali Funeka.

Despite being physically drained from unsuccessfully trying to make the 135 lb. limit, Campbell would fight his heart out against the lanky, 6ft 1 South African in one of the gutsiest performance of the year.

The last three contests of his career were frustrating encounters for both Campbell and his fans. Campbell would fight to a heated No Contest against Timothy Bradley and a one-sided loss to Victor Ortiz, both at 140 lbs. His last official bout, a split decision loss to journeyman, Walter Estrada, on the Marquez-Katsidis undercard, put the lid on a 10 year, 41-fight career which saw Campbell finish with a mark of 33-7-1 (25 KOs).

“After thinking about Saturday’s fight, I know it’s time for me to hang it up,” Campbell said in yesterday’s press release to announce his retirement. “I’ve reached the point where I can still see the openings, but I just can’t get my shots there in time…I didn’t enter this sport to be anyone’s opponent. I entered this sport to become a world champion. I am fortunate that I was able to accomplish that goal. I would have liked to continue on to win titles in other divisions, however when your body tells you that it’s time to go, then it’s time to go.”

Nate Campbell has never been the biggest, fastest, most athletic guy in the sport. He’s never boxed with the proverbial silver spoon in his mouth and has never received the kind of press other top fighters take for granted.

But what the sport always got from Campbell was an honest effort, a dogged work ethic, and the guts to be a straight shooter in a world full of fakes and phonies; What he lacked in raw talent, he made up for in character…and that’s the true judge of a man.