Fighter of the Month– Sergio Martinez 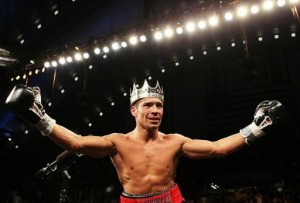 This was a real tough one because there were so many qualified candidates, but the edge has to go to Martinez.

“Maravilla” vs. Paul Williams was an even money fight between two dangerous and well-avoided fighters. The entire world expected a close back and forth like their first encounter, but Martinez never allowed a war to develop. His headline-grabbing 2nd round KO made an impact all around the world, from hardcore fans to the casual observer watching Sportscenter. It also may have given the sport something that it desperately needs– a US based draw not named Pacquiao or Mayweather.

Runners-up: Carl Froch for his destruction of Arthur Abraham, Juan Manuel Marquez for his masterful display against Michale Katsidis, and Jason Litzau for his upset of Celestino Caballero.

Bum of the Month–  TIE: Antonio Margarito, Brandon Rios, Robert Garcia, and the Duplicitous Members of the Boxing Media.

When the disgusting video of Margarito and Rios mocking Freddie Roach’s Parkinson’s under the smiling approval of Garcia first got uncovered by Bad Left Hook, there was an immediate scramble to cover it up.

First , the video got pulled by either the creator, Elie Seckbach or the website in which the video aired, AOL Boxing Fanhouse …then, it re-appeared with the offending mockery edited out…then, after they realized that many of us had downloaded the original and were making it viral across the net, they even removed the edited version and went around demanding that YouTube pull all copies of the original, unedited video under the pretense of copyright infringement. Hours passed and more videos popped up as soon as they were pulled. AOL Fanhouse remained silent on the issue despite the massive buzz all across cyberspace.

With no choice but to acknowledge the incident, Fanhouse and sister site, Boxingscene.com, re-posted the full, unedited video shortly before the “stars” of the video made their public apologies (Claiming, among other things, that Rios didn’t even know Roach had Parkinson’s)

While mocking a Parkinson’s sufferer is obviously vile, the real story is the mad dash from a supposedly independent news source to cover up material deemed harmful to a specific promoter’s crew, days before a major pay per view.

There was a real attempt to cover up this video and make it all go away…These supposedly “legit” boxing sites, AOL Fanhouse and Boxingscene, did the exact opposite of what a real news source would do when presented with a headline-worthy news story– they swept it all under the carpet. And that makes them every bit as vile as Margarito, Rios, and Garcia.

BTBC  Forum Thread of the Month:  A Bad Dormant Night for Manny Pacquiao by TRUTH

The BTBC is boxing’s first 100% troll-free home for hardcore boxing fans. Tired of the flame wars, racism, and general stupidity on other boxing forums? Give The BTBC a try.