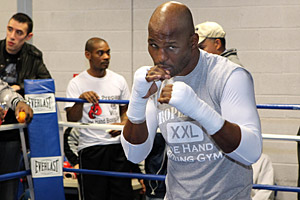 “Pascal challenged me. Pascal called me out. He is risking his belt, and I am going to make him wish he hadn’t…The pressure is more on him than on me. I am going to dissect this guy. I am going to take him apart.” –Bernard Hopkins

“I know very well who was doing the head butting the night of October the 31st (2009). I know Agbeko was a great fighter, but I want him to stop complaining about the head butting. The one who had the eyebrows that needed to be stitched was Yonnhy Perez. Ask Vic as well, he (Agbeko) didn’t bust his face because of his punches, he busted his face because of his head. I wish that he stops complaining about the head butting that night. I only ask that he gets prepared because we gave the fans a great fight. I am ready, he is ready, and lets do it again.” –Yonnhy Perez

“I was looking for a match at super flyweight. When I fought I was inpatient before, I just wanted to knock him out, but I am comfortable at any weight. I can lose as much weight as I want or I can put on as much as I want. It is going to be my show, my tournament. I am going to prove to everyone that I am very skillful and a good puncher. I am very prepared and confident.” –Vic Darchinyan

“All I can say is I had a game plan and went into the ring to win. The way the fight ended was frustrating to me as I didn’t get going and was just settling into my rhythm. Both styles of feinting and moving was off-setting the both of us in the first two rounds and I was just zoning in on his rhythm when he got through.” — Audley Harrison (on his fight with David Haye)

“I understand that in the USA it’s not only big business, but also millions of boxing fans. If I fight in America people can see me all over the world! But my dream is to defend the world title in Russia. Even if they would offer me less money than in the USA, if they show the fight on one of main channels, I’ll agree. I want to lift the popularity of professional boxing in Russia.” — Dmitry Pirog

“It’s one of those things where I got caught at the end of the fight. Marquez did a great job. I always knew it was in the cards to knock him down but this is boxing and he has a lot of experience. He hurt me and it ended up getting stopped.” –Michale Katsidis

“Berto is a pussy. Fight somebody already. I don’t give a fuck what people say about me. Some might say I’m a cry baby but its okay because it showed how bad I wanted to win.” –Kermit Cintron

“Boxing is divided between the classes of ‘A’, ‘B’ and ‘C’. He is is definitively a ‘B’, but far from being an ‘A’, and a lot further away from being an ‘A+’ like myself and Rafael Márquez have shown to be in the ring. Now he should shut up and try to reach that level.” –Juan Manuel Lopez (on Celestino Caballero)

“Vitali has no room for escape. He tried to dodge his obligations again but failed. I’ll be the man to end the reign of Klitschko.” –Odlanier Solis

“I still can’t believe the way that Harrison fought. It was pathetic. If I perform like that against Klitschko, I’ll never show my face again in the UK.” –Dereck Chisora

“It’s just not realistic and I don’t think Schaefer really wants Juan to fight Pacquiao again. Schaefer knows, like everyone else does, that Manny will kick the shit out of Marquez. They want to avoid Manny and, that way, Schaefer can put his guy in with (Robert) Guerrero or someone else. Schaefer knows that if he has him fight Manny now, that will be the end for Marquez.” –Bob Arum

“I’m conducting business myself…If I have to wait for these others, I’m not going to get the fight I want” –Shane Mosley

“Freddie don’t like that fight and I’m going to tell you why. Freddie knows me. I’ve been in the Wild Card Gym for a long time, back when James Toney was there and all that. I sparred with everybody in the gym- big, small, whatever- and Freddie Knows I’m a smart fighter and he knows that I’m strong. He knows me and Freddie is scared of Pacquiao fighting me. I figured out what he showed Pacquiao already and, you know, there’s going to be some problems and he knows that. Freddie watched me and he knows me. He knows that I can fight different styles; he knows all that stuff. Freddie Roach knows that I throw that right hand pretty good and Pacquiao leaves himself open and can get hit. Freddie knows I hit hard. Pacquiao throws all them punches and stuff, but he gets hit. He leaves himself open and that’s not good for Pacquiao, especially because I’m strong and I take a good shot too.” –Shane Mosley