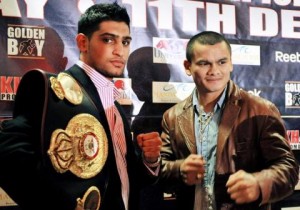 “I’m not worried about his boxing ability. I’m prepared for anything that he does. If I can get a knockout it’s good, but I’m ready for a twelve round fight. Khan says that he plans to fight with me. That’s good for me, because when I land – the fight will be over.” — Marcos Maidana

“A lot of people talk about Maidana’s power, but I also have a lot of power. I think I’m one of the biggest punchers at 140-pounds. Everyone talks about my boxing, but I think I’m coming into this fight as a puncher. I’ve been working very hard on my punching power with Alex Ariza, especially for this fight, and I think I’m going to show my power on Saturday night.” –Amir Khan

“I’ve tried to fight him for years. I hope this time he doesn’t back out. He always agrees to fight and when the time comes, he backs away. I hope this is the final time and it happens,” –Fernando Montiel (on Nonito Donaire)

“I’m going to bite his nose.” Brian Nielsen said (on his March fight with Evander Holyfield)

“Against Harrison, Haye did his show and got away with it. But he needs us more than we need him. He can’t fight in the US because [Oscar De La Hoya’s promotional company] Golden Boy will be on his neck. He can’t fight in Germany because [promoter] Kalle Sauerland will be on his back. So he is sitting alone in London, trying to be smart, but, little by little, he’s putting himself in a corner. It’s enjoyable to see.” — Wladimir Klitschko

“Mares is good. I’ve seen his fights. He’s strong. He’s fast. But on the night of the fight, I’ll slow him. I’ll take away his strengths. You will see a new Vic Darchinyan, hungry and motivated like a
young fighter…I go for the knockout. It’s exciting. It’s what people want to see. It’s simple.” — Vic Darchinyan

“Joseph [Agbeko], I have a surprise for you. The Washington state commission agreed to it. Since you’re known for the head butts, I am going to have Perez and Vic fight you in a tag-team match. When you head butt one of them, we’ll tag in the other while the first guy gets sutured up.” –Gary Shaw (Promoter of Vic Darchinyan)

“Hello everyone, I am writing these words with great sincerity. Bob arum first of all happy b day and second I want to apologize for anything That’s I have said. let’s somehow put this behind us and make fights let’s show the world why boxing is the best sport.” — Oscar De la Hoya via his verified Twitter account

“I want to convince everyone that I’m ready to fight for another world championship in another weight division. I will prepare in Los Mochis, in the gym Kochules. I will show up very well prepared. I feel that I’m at my best. I know that if I win on December 18, it’s possible that I’ll challenge Wilfredo Vazquez for the junior featherweight title, and I want that opportunity.” — Jorge Arce

“God has blessed me by letting me be part of boxing and now I need to live long enough to attend the Hall of Fame in Canastota in June 2011…Boxing saved me and has given me the chance to save others who may be walking in the wrong direction. This is very beautiful.” — Ignacio “Nacho” Beristain (on his induction into the Boxing Hall of Fame)

“Russian sportsmen have proved once again that they are among the best in the world.”– Kostya Tszyu (on his induction into the Boxing Hall of Fame)

“I think that Alvarez is probably the best 20-year old fighter I have seen in some time in terms of being a complete fighter and having skills, toughness, hunger, bravery, a good sense of what is going on in the ring and knowing when to go and not to go, and having a balance of defense and offense. At this point he seems to be sophisticated beyond his years as a professional prizefighter. He’s playing hard and tough and showing stamina and skill. Right now I love what I see.” — Larry Merchant (on Saul Alvarez)