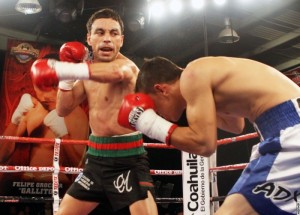 Recap– In a non-title affair, WBO/WBC bantamweight champion, Montiel, easily dismissed a weathered, over-matched Soto. Everything Montiel landed seemed to hurt his opponent, sending him to the canvas once in the first and two times in the second. The official time of the KO was 2:29 of the second round.

Recap– In a close, entertaining battle, Paredes came away with the minor upset by beating an always tough and hard-charging Pitalua via split decision. Paredes would do his best work from the outside while Pitalua, predictably, fought to turn the contest into an inside war. A half-slip after a legit punch by Pitalua in the eleventh was ruled a knockdown, but it turned out not to be a factor in the decision. The judges’ scorecards read: 114-113, 117-110 for Paredes and 115-113 for Pitalua. The Boxing Tribune scored it 114-113 in favor of Pitalua.