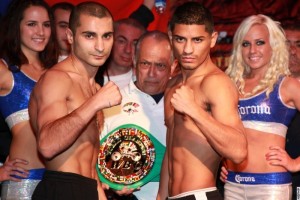 The British Board of Boxing Control is investigating Audley Harrison and could withhold his purse from the David Haye debacle. Why? The BBBC should withhold their own wages for sanctioning the fight.

Tomasz Adamek won a Heavyweight fight Thursday night against a guy that was smaller than him. I thought he was supposed to be preparing for the Klitschko brothers?

Anthony Mundine got pole axed this past Wednesday, I smiled.

Joan Guzman has failed to make weight again, I wish Bookmakers would take bets on fighters failing to make weight. it’s a sure thing with Guzman

Nonito Donaire has never looked better than he did this past Saturday. With Montiel also winning this weekend via KO, we have a hardcore fight fans dream matchup happening in late February early March.

Why hasn’t Manny Pacquiao been stripped of his 147 WBO title?

The WBO has a history of stripping fighters for this very rule. Looks like the Pactards have invaded the sanctioning Bodies.

To even things up, Floyd Mayweather is still the WBC 154 Emeritus champion. Floydtards need love as well.

Looks like Wladimir Klitschko v David Haye is actually going to be signed. Why the hell Is it in Vegas though? The Gate would be tripled at Wembley Stadium.

What the hell was Randal Bailey doing?

Fight Night Champion looks to be shaping up nicely, there are over 50 fighters in the game with New fighters such as David Haye, Chad Dawson and Butterbean…………..

It looks like HBO will not be renewing their deal with GBP. Just where will GBP go after that? There have been many rumours over the past few months that, as a company, GBP is struggling, without the guaranteed TV dates and money from HBO, the rumours could very well turn into fact.

Lets take a look at this weeks fights:

On Monday it all seemed too perfect, nine hours of live Boxing with some truly scintillating bouts. It was a boxing fans dream, we had prospects fighting, champions defending and the prospect of what boxing fans really want– a war, and this weekend we had the potential for many of them.

Unfortunately we now know that Wladimir Klitschko has pulled out of his defence against Derek Chisora, Nathan Cleverly has a new opponent and UK Olympian Frankie Gavin has pulled out with illness. Luckily the main attractions this weekend have come through unscathed.

James Degale takes a major step up in class tonight when he takes on the underrated former contender contestant Paul Smith for the British and Commonwealth title. It is a fantastic fight and a genuine 50/50 contest. While the edge in Ability lies with the Olympic Gold Medalist Degale, the experience and the power lies with Smith. It should a be a great fight.

Amir Khan takes a massive gamble by taking on KO King Marcos Maidana . Its another 50/50 fight. Can anyone actually state 100% they know who is going to win? Would you bet your house on the result? I wouldn’t.

Like 50/50 fights? Here is another, Abner Mares goes toe to toe with Vic Darchinyan. Vic has a massive edge in power while Mares clearly has the better boxing ability. The question is whether Mares’ chin can stand up to Vic’s bombs? If it can, he should win.

Yonnhy Perez v Joseph Agbeko was a fight of the year contender last time out. Expect the same this time. The only worry is that Agbeko has not fought since their original battle. Will there be ring rust or will he be rejuvenated? Either way it’s a damn good fight.

See you next week.