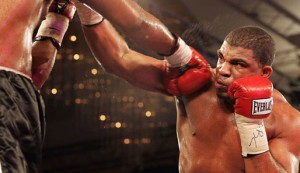 Recap– Former Cuban amateur star, Odlanier Solis, looked like a seasoned pro against veteran contender, Ray Austin, on Friday night. Solis walked down the 6 ft 6 Austin, picking his spots and firing educated counters behind a high guard. In the fifth, an offensive surge from Solis dropped his rival and nearly put an end to the contest. Austin would survive and have his best rounds in the fifth through eighth with a sharp uppercut that split Solis’ high guard. In the tenth, Austin was seriously buzzed by a Solis combination and once again went to the canvas. On shaky legs, Austin tried to wrestle Solis to the canvas and then, at the end of the round, nearly caused both fighters to fall out of the ring with some wrestling along the ropes. After being pulled away from the ropes, Austin fired a weak punch that grazed an unsuspecting Solis. This provoked the referee, who had already penalized Austin for holding, to disqualify the native of Cleveland, Ohio.

What this means to boxing: This was a WBC eliminator for a shot at Vitali Klitschko, so Solis will likely be headed to Germany in the Spring or early Summer of 2011. Solis is technically perfect and showed an ability to handle a taller fighter with a long reach, but he seemed to lose focus in spots. As for Austin, it looks like it may be the end of the road for the 40-year old, 12 year veteran.

Recap– Zuniga did his best and actually tried to use lateral movement to beat the bigger, stronger IBF light heavyweight champ, Cloud. Unfortunately for the Colombian, he’s neither a boxer nor a legitimate light heavyweight. Cloud easily absorbed the former middleweight slugger’s best and landed some heavy leather of his own, dropping his opponent in the fifth and twelfth rounds. To his credit, Zuniga absorbed some big shots throughout the contest, but just couldn’t match Cloud’s physicality. The defending champ, despite cruising to an easy unanimous decision (117-108, 118-108 and 116-109), seemed to lack focus and drive for major chunks of the fight. The Boxing Tribune scored the contest 118-108 in favor of Cloud.