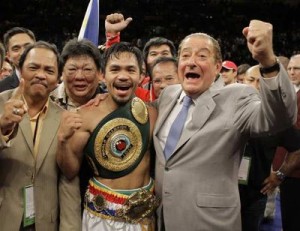 After two years of aggressive denial and of helping promote the most cynical matchmaking of an elite-level fighter in recent memory, the mainstream boxing media has finally come out loud and aggressive in their condemnation of Shane Mosley as Manny Pacquiao’s next opponent on May 7th in Las Vegas.

But, lest we forget, these very same “experts” actually encouraged Bob Arum’s hubris in matching Manny against anyone he damn well felt like. For two years, Pacquiao zig-zagged over three divisions, picking up meaningless belts from the loser’s bracket against toothless tigers while the media nearly built monuments to the Filipino Buzzsaw and his greatness.

Dan Rafael of ESPN had this to say about the Pacquiao-Mosley matchup: “Arum doesn’t care. He only wants to do what is best for himself, certainly not for boxing. He is going to put Mosley in the ring with Pacquiao soley because of name. It’s a move that will squeeze out the last gasps of Mosley’s once-outstanding career so Arum can generate another big payday while doing a disservice to real boxing fans who actually care about the matchups and not just a famous but faded name…A one-sided loss [and a draw in an awful fight] is not supposed to be how you land a fight with the pound-for-pound king and the sport’s most popular fighter.”

Of course, Rafael’s statement is the truth, but the difference is that some of us have been saying this since Pacquiao, post-De la Hoya conquest, first started on his road to super stardom. Take out the name “Mosley” from the above quote and substitute it with “Hatton, Cotto, or Margarito” and it holds just as much water.

Max Boxing’s Steve Kim, who was, literally, tailgating in the parking lot of Cowboys’ Stadium for Pacquiao-Margarito, has suddenly become critical of Pacquiao’s matchmaking, writing that the choice of Mosley as an opponent was a slap in the face to “those who still care about this sport.” But, not only did he actively support the choice of Margarito for Manny, despite having been KOd by Mosley and banned by the CSAC for tampering with his handwraps, he took to his beloved Twitter and openly mocked those who talked of boycotting the contest.

Kevin Iole, of Yahoo Sports, has called the selection of Mosley “garbage.” In the same article, he goes so far as to say that the 39-year old was selected because “He’s the least likely of the three contenders [Mosley, Juan Manuel Marquez, Andre Berto] to win.”

Iole’s candor is appreciated, but we didn’t hear much of it while Arum was cherry-picking vulnerable foes among his own stable of fighters with complete impunity.

As a matter of fact, we barely heard a peep from any of these media sources during the entire 2-year rise to “all-time” greatness. The harshest criticism we got was the occasional brief voicing of displeasure that came off more like quiet resignation than a real dig at Top Rank’s cash cow.

If the mainstream media was displeased by anything that was going on with Team Pacquiao, it was certainly a well-kept secret. The only ones even questioning Pacquiao’s consumption of one faded, emasculated fighter after another were those of us in the independent media who, by the way, had nothing to lose by telling the truth. No high-profile jobs, no press passes, no per diems, no access to Top Rank interviews.

It’s quite puzzling that many of these same media members, who have acted as de facto co-promoters for the last two years, are suddenly and abruptly outraged by the choice of Shane Mosley as an opponent.

Mosley will be four months shy of his 40th birthday when he steps in the ring against Manny Pacquiao on May 7th and, while the talk of him being a shot fighter is certainly a valid topic for discussion based off his recent performances, he presents a much more difficult stylistic task than any of Manny’s recent foes. Mosley, in his own way, is every bit as threatening as Margarito and, frankly, much more deserving of the shot.

So, why this moment of Satori from the ones whose indifference enabled and encouraged the situation in the first place? Why this sudden concern about “those who still care about this sport?”

One thing is for sure, though; Team Pacquiao is not to blame for this. They, like any team surrounding a boxer, will try to make the easiest fight possible for the most money. You can be sure that Floyd Mayweather, if he had the same stablemates as Pacquiao and the same access to Bob Arum’s evil genius, would also have been seeking to feast on the loser’s bracket. But the difference is that the media would never have allowed it.

Back in 2006, when Mayweather chose to fight Zab Judah, the loser in the Baldomir-Judah contest, the media was a united front against the “audacity” of the most talented fighter in the world choosing to make money and earn a paper title off a guy who had lost his last big fight.

“Why would you want that fight? (against Judah)” ESPN’s Bryan Kenny would ask Mayweather during their now-infamous dust-up on ESPN. “He lost that fight…why put this guy in front of you…why not fight Baldomir?… How could you say that [Judah is a legit opponent], as the #1 pound for pound fighter in the world, knowing that he just lost to Baldomir…”

This is the way the media should be, only across the board and with a supreme even hand. The media exists to report the news and make it known when someone is pulling the wool over the fans’ eyes. Their bond should be with the fans and not with the promoters and publicists who, more and more, have found the boxing media quite willing to shill for them and/or be led around by their own agendas.

Boxing, more so than any other sport, needs a strong and resilient media. With no reasonable sanctioning body, no union, and a dwindling presence in the mainstream sports world, the media is the last line of defense for a sport that has been beaten into the ground by its own power brokers.

Some of us were on the soapbox, insisting that Manny be judged on the same scale as every other fighter, but most were just going along with the program. While those of us in the business just for the love of the game were putting our necks on the line by voicing a very unpopular point of view, the head writer of one of boxing’s biggest websites was loading up his George Foreman grill, stacking the cooler with Budweiser, and stroking his ego by basking in the VIP treatment made possible by Top Rank. That should say it all right there.

Now, the media is outraged and talking about what’s “bad for boxing.”