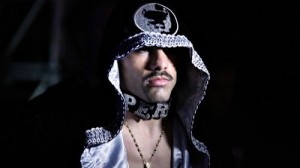 An anonymous source has informed The Boxing Tribune that Golden Boy Promotions has entered into a promotional deal with jr. middleweight contender, Alfredo Angulo.

The Mexican-born Angulo found himself the subject of controversy in the Fall for his immigration status and questions surrounding whether he had the proper documentation to remain in the US.

Prior to that, Angulo and promoter Gary Shaw’s relationship hit the skids when Angulo turned down a $750,000 middleweight title fight against Sergio Martinez (and a sweet deal that would’ve allowed for a catchweight clause under the middleweight limit and a guaranteed return fight on HBO).

The source did not indicate how Shaw played into Golden Boy’s dealings with Angulo or if any partnership or buy-out had taken place.

Reportedly, Golden Boy is working behind the scenes to fix Angulo’s immigration problem before making the official announcement.

If true, Angulo’s addition to the roster will add to Golden Boy’s strong presence in the jr. middleweight division, with James Kirkland, Saul Alvarez, and Cuban prospect, Erislandy Lara, already under contract.

Angulo would also benefit from Golden Boy’s strong influence among Mexican-American fight fans as well as their ever-increasing presence in Angulo’s native Mexico, where the fighter is virtually unknown.

Again, this is thus far just an unsubstantiated rumor from a trusted source with insider info. More to come as info becomes available.