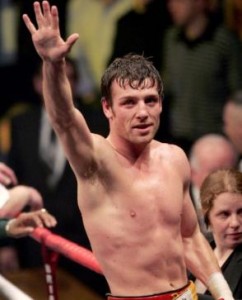 Ireland’s John Duddy, who was set to take on countryman, Andy Lee, in a March 12th HBO bout, has suddenly retired from the sport. Duddy, who never quite lived up to the early potential he showed, retires with a record of 29-2 with 18 KOs.

After a great deal of soul-searching, I have decided to retire from boxing.

In many ways, continuing to fight would be the easy course of action. I have been offered the opportunity to fight Andy Lee on HBO for a purse in excess of $100,000. A win would put me in position to fight for a world championship. This is not an opportunity that I cast aside lightly.

I started watching my father train in the gym when I was five years old. I began fighting competitively at age ten. For more than twenty years, I loved being a boxer. I still feel that it’s an enormous honor to be a boxer. But I don’t love it anymore.

I no longer have the enthusiasm and willingness to make the sacrifices that are necessary to honor the craft of prizefighting. I used to love going to the gym. Now it’s a chore. I wish I still had the hunger, but I don’t. The fire has burned out. And I know myself well enough to know that it won’t return.

I haven’t accomplished everything that I wanted to achieve in boxing. But I’ve had a rewarding career. I‘ve enjoyed the satisfaction of winning twenty-nine professional fights and learned lessons from my two losses. I’ve experienced the thrill of fighting in Madison Square Garden, Cowboys Stadium, and, also, my beloved Ireland with crowds cheering for me. I look forward to finding future challenges that bring as much passion and joy into my life as boxing has over the past twenty years.

Barry McGuigan was one of my childhood heroes. His photograph was one of the first things that visitors saw when entering our home in Derry. He had great influence on me when I was a boy.

Barry McGuigan once said, “Fighters are the first people to know when they should retire and the last to admit it.”

I know that it’s time for me to retire from boxing, and I’m admitting it.

I’m fortunate to have had the support of many good people throughout my career. To my fans; to the people in the boxing business who have been part of my team over the years; and most of all, to my wife Grainne and the rest of my family; thank you for your love and support.

I give you my word; I will not come back.