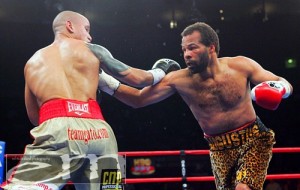 Boxing’s “Drunken Master,” Emmanuel Augustus (38-33-6, 20 KOs), who is taking on Vernon Paris (23-0, 14 KOs) in place of Tim Coleman, on the Timothy Bradley-Devon Alexander undercard this Saturday in Pontiac, Michigan, announced his retirement late last night via his Facebook account:

“MY FIGHT AGAINST VERNON PARIS WILL BE MY LAST. I AM RETIRING FROM THE SPORT. I WILL SPEAK MORE ABOUT IT AFTER THE FIGHT. I JUST WANTED TO LET PEOPLE WHO LIKE TO WATCH ME FIGHT KNOW SO THEY CAN TRY AND SEE IT. IT’S TOO BAD IT WONT BE ON TELEVISION BECAUSE I AM BACKING OUT OF THIS SALOON THE SAME WAY I WALKED IN, WITH BOTH GUNS BLAZING. THANK YOU FOR ALL YOUR SUPPORT THROUGH THE YEARS. PEACE.”

Among Augustus’ honors is a 2001 Ring Magazine Fight of the Year award for his bout with Micky Ward as well as a viewer-voted designation as Friday Night Fights’ most memorable boxer. In his nearly 17-years in the sport, Augustus has fought against the likes of Floyd Mayweather Jr., John John Molina, Micky Ward, Leavander Johnson, David Diaz, and Ray Oliveira among many others.