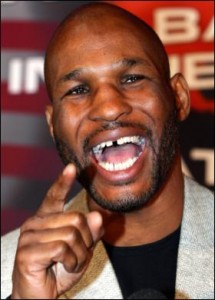 I don’t mind these smaller pay-per-views and I’m not going to be harping on the fact that the Holyfield-Williams show sucked when, really, we all knew that it was going to suck. It’s like going to White Castle and then complaining about the bitter, onion-fueled indigestion.

My problem with shows like Saturday’s Evander Holyfield PPV is that the producers of the show didn’t even try to make it entertaining. So, ok…you have a low budget show. Everyone is tuning in to see Holyfield. Why muck it up with guys like Julius long or Charles Davis? There are plenty of low-budget, well-booked bouts that could be made. Why not reward Holyfield fans with some good undercard bouts between no-namers? Or, at least, book Barrett and Johnson against one another with a couple of four-rounders to round out the card? Show some appreciation to the fans loyal enough to pay 30 bucks for a meaningless Holyfield fight.

Instead, the Holyfield fans who took the leap of faith got rewarded with a lousy show, a Ray Charles impersonator, and an aborted main event that ended right when it appeared to be headed somewhere interesting.

Speaking of Holyfield, I’m not one of those people who will wring their hands and cry that Holyfield should retire or that, ridiculously, his presence is somehow bad for the sport.

If he can still pass a physical and there’s still a market for him to fight, then there’s nothing that can be done. The fact is that there have been plenty of people who had the opportunity to retire Holyfield, but none have done it and, as long as Holyfield is on the seniors circuit, nobody will likely retire him.

I don’t think his presence in the sport is any more harmful than several prime, world class fighters who currently refuse to fight their most logical opponents.

The 2011 year in boxing has gotten off to a real crap beginning with probably one or two real worthwhile fights taking place in the first three weeks of the year.

What a way to build off the momentum created from an outstanding November-December in 2010.

With the active roster of available fighters, why we have to go through these droughts of weeks and sometimes months where no major action takes place? It’s a real buzzkill for fans to have periods of quality action and then long stretches of nothingness. There’s is absolutely no reason why we can’t have a major fight each week, either on HBO, Showtime, PPV or via smaller outlets like ESPN.

Boxing Tribune writer, Green Machine, touched on this in his article yesterday, but boxing fans, generally speaking, have to be some of the most misinformed sports fans in the world.

Sure, there are a small percentage who are up on all the goings-on and have a mature, informed perspective on the sport, but most are just drifting along with little more than a general idea and their own prejudices to guide them.

I blame the boxing media for that.

Is it any mystery why fans stay in the dark when all of the major sites are owned, either literally or figuratively, by promotional or network interests? And the writers who do get info out there have their own prejudices, conflicts of interest, and egos to make things nice and murky.