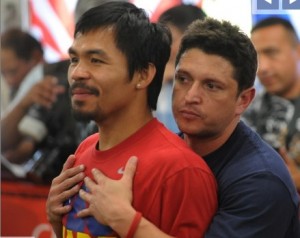 Since I’m saving my thoughts on Bradley-Alexander for another piece (to be posted later) and there hasn’t been much else going on, I’ve decided to put my own spin on one of the easiest, most tired ways of filling some cyber space….A Mailbag!

But, not just any mailbag!

Never let it be said that The Boxing Tribune’s Editor in Chief isn’t creative enough to at least put a fresh spin on the tired old mailbag…so, here, for the first time ever, is The Pacquiao Mailbag: a semi-regular time waster dedicated to my favorite breed of crazed boxing fan. All of these are real emails received by yours truly…enjoy:

Thanks for writing CNN. I have to say that your use of CAP LOCK has convinced me. I’m sold. Would you happen to have a mailing list I could subscribe to?

IF PACQUIAO ONLY NEEDS FEW EVIDENCE TO CORROBORATE WHAT THESE PERSONALITIES SAID DURING THOSE TIMES. ID SAY THERE ARE FEW BEING PUBLISHED EVERY DAY AND ON YOUTUBE. I CAN PERSONALLY SAY THAT THOSE WERE MORE THAN ENOUGH TO PIN DOWN THOSE MASTER MINDS OF FRAUD. PACQUIAO SHOULD HAVE INCLUDED WRITERS INCLUDING TIM SMITH AND TEDDY ATLAS BECAUSE THESE DUDES ARE NOTHIN BUT CLUELESS TO WHAT THEY SAY. AS FOR PAUL MAGNO SAYING HIS PIECE.. ARE YOU EVEN A LAWYER? THIS THING IS HAVING ITS COURT DATE. SO SHU T UP!

I have to say that I’m really digging on the caps. Maybe I’ll use them from now on, when I really WANT TO MAKE A POINT.

so… Paul “STUPID DUMB BLOGGER” Magno….. Can you be more specific as to who is the fighter that you think will beat PACMAN? YOUR JUST A BLOGGER!!! NOT A WRITER..

Now, why would you go and try to hurt my feelings like that? I guess I admit to being a blogger…yes, maybe even a STUPID blogger….but “STUPID DUMB?” Man, that’s low…by the way, wanna hear my Super Bowl prediction? Packers by 6.

i remember this writer… he is a real ass and a pac hater… you are insulting the fans by not writing black and white by not telling the other side of the story. you only want pacman to look bad in your writings. bullshit man!

Clever word play…using a name similar to mine, but made to sound female and then switching my last name around to make it sound like a fruit. Nice touch!

As for the meat of your email, well, I guess I stand BUSTED. My goal in boxing has always been to hate and discredit Manny Pacquiao. I mean, really, there is SO much money to be had in NOT writing positive Pacquiao articles. However, now that I’ve been “outed” by the Sherlock Holmes of boxing retards, I guess I’ll just have to shut up or dedicate my marginal talents to glorious puff pieces about Pacquiao and why he is a god among men. Examiner.com…here I come!

Have a great week, fight fans.

You can email Paul at paulmagno@theboxingtribune.com, follow him as he stalks gorgeous female strangers on Facebook and catch him as he dodges narcos and gringo-hungry señoritas in Michoacan, Mexico. Paul is a full member of the Burger King Kid’s Club and an ordained minister in the Universal Life Church.