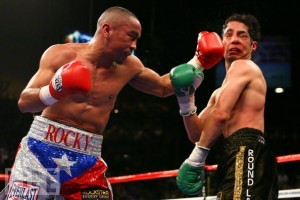 Juarez, who was once a well-regarded Olympic Silver Medalist, has lost his last three and has faced a bit of a backlash from fans and media for the amount of TV exposure he was afforded by promoter, Golden Boy.

Still in possession of solid fundamentals and heavy hands, the 30-year old Houston native is looking to make another run at a major title, likely at 130 lbs.

His opponent, Sanabria, is an aggressive, come-forward fighter with no real world-class opposition on his resume.