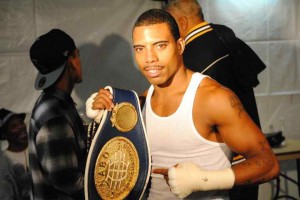 Ramos controlled the first half of the ten-rounder with his speed and athleticism, but Valdez slowly worked his way back into the contest, putting pressure on the undefeated Californian and working his way up close.

Ramos re-established his domain in the final round, despite being dropped by a clash of heads early in the round. The judges’ scorecards were 97-93, 97-93, and 98-92. The Boxing Tribune also scored the fight 97-93 for Ramos.

In the televised opener, super middleweight, Don George (21-1-1, 18 KOs) scored three knockdowns against Cornelius White (16-1, 15KOs) before the ref waved off the contest.

Decarie controlled the pace of the bout throughout, although Alvarez seemed capable of doing much more than he did. The Quebec native cored knockdowns in the fifth and eighth rounds. At the end of the ten round bout, the judges scorecards read: 97-91, 99-89, 98-90.