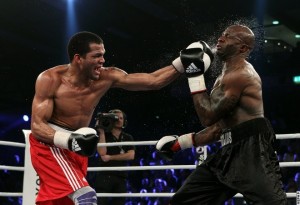 Arthur Abraham (32-2, 26 KOs) TKO 2 Stjepan Bozic (24-5, 15 KOs): The sterile, eerily robotic German fans got about 30 seconds of Abraham’s new, all-aggressive style on Saturday before the former IBF middleweight champion, and current super middleweight whipping boy, slipped right back into old habits. The contest was surprisingly close until Bozic hurt his left hand on Abraham’s elbow while the Armenian-German hero was in typical high-guard mode. Unable to continue, Bozic was ruled the loser via TKO while Abraham did what he does best these days- lean up against the corner and look disappointed. Of course, the bout should’ve been declared a No Contest, but we all know that it would’ve taken a German panzer division to take the win from Abraham. From the very beginning, this was booked to be Abraham’s heroic return to form, but sometimes there’s a nasty karma backlash to cynical matchmaking…Last night did nothing for Abraham or his chances against Andre Ward in the semi-finals of the Super Six tournament.

Steve Cunningham (24-2, 12 KOs) UD 12 Enad Licina (19-3, 10 KOs): USS Cunningham has two problems when it comes to his reign at, or near, the top of the cruiserweight division: 1) He has to fight more often and 2) He has to look impressive when fighting.

Cunningham, in this contest and defending his IBF cruiserweight title, looked like he does in most of his recent bouts– talented, athletic, and just good enough to win. Steady and mature may make for a great accountant, but nobody’s paying for a well-grounded family man in the squared circle. People want excitement and dominance.

In this contest, Cunningham handled a very good Licina in a close contest that really became a tedious chore to watch after the first four rounds. The judges’ scorecards were: 118-110, 115-113, 117-111. The Boxing Tribune also scored the fight 117-111 for Cunningham.

Yoan Pablo Hernandez (24-1, 13 KOs) TKO 7  Steve Herelius (21-2-1, 12 KOs): The Cuban import, now residing in Germany, Hernandez, doesn’t look like much until he actually starts throwing punches–and that was the case once again as he took on fellow top-10 cruiserweight, France’s Steve Herelius.

After six rounds, split right down the middle, Hernandez took advantage of an apparent injury to Herelius’ left leg and, in the seventh, splattered the much shorter Frenchman with a right-left combination. Herelius managed to get back to his feet, but was sent face first to the canvas with an even better combo. A referee count was not necessary.

Marco Antonio Barrera (67-7, 44 KOs) TKO 2 Jose Arias (15-2, 9 KOs): The only question about this contest Saturday night was whether Barrera’s opponent, Arias, would actually be able to make it to the opening bell without hyperventilating. Looking tense and frazzled (almost as if his career thus far had mostly consisted of four-rounders in Costa Rican night clubs!), Arias was leveled just seconds into the contest and then gradually beaten down by a Barrera who barely broke a sweat. It’s unknown what Barrera was trying to prove by this kind of matchmaking, but if all else fails, we know the former 3-division world champ can become the baddest night club bouncer in all of Costa Rica.

Omar Narvaez (33-0-2, 19 KOs) UD 12 Victor Zaleta (17-2, 9 KOs): Zaleta was never in the contest and Narvaez never even came close to losing a round. The ref could’ve done everyone a favor by stopping the bout in the ninth, but he let it go on and Narvaez, in front of his home crowd, made the first defense of his WBO super flyweight title. Adding insult to injury, the ref had also deducted a point from Zaleta in the sixth for a low blow.  The judges’ scorecards were: 119-108, 120-107, 120-107. The Boxing Tribune also scored the bout 120-107 in favor of Narvaez.  Hopefully, we get the rumored Narvaez-Hugo Cazares bout that has been mentioned here and there.

Sammy Gutierrez (26-5-2, 17 KOs) TKO 6 Renan Trongco (8-3, 5 KOs): Let’s forget the absurdity of Trongco getting a title shot (albeit for an interim WBA minimumweight belt) based off a career where his opponents’ collective record was 4-15-3. The oddest part of this contest was that Gutierrez, who actually is a good, young talent, had absolutely no idea how to fight a southpaw and was even caught cold and dropped by Trongco’s first real punch from the southpaw stance.

Gutierrez was sloppy throughout, unable to adapt to the southpaw, but his class eventually wore on the game Filipino and the bout became one-sided by the sixth, causing the ref to stop the contest later that same round.